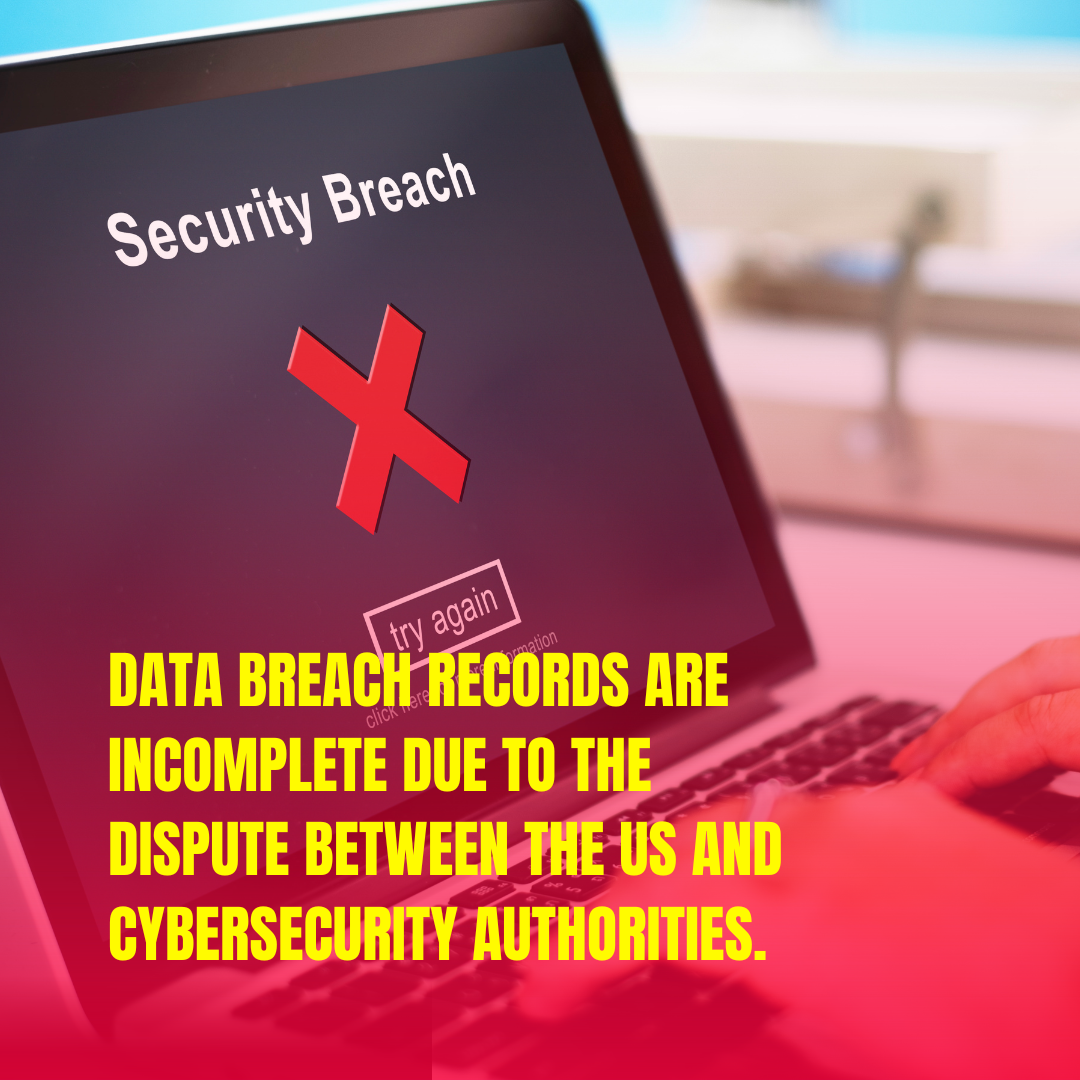 According to a recent report, data breach records are incomplete due to the dispute between the US and cybersecurity authorities. The report, which was released by the UK-based research firm Risk Based Security, found that nearly 60 percent of data breaches in the United States go unreported. This is a troubling statistic, particularly in light of the recent string of high-profile data breaches.

The Identity Theft Resource Center, a nonprofit organization that assists the victims of identity theft reported 1291 publicly disclosed data breaches in the first nine months of 2022. At that rate, the 1,862 recorded data breaches in 2018. Now this record will probably not be surpassed in 2022. Notably, however, since the fourth quarter of 2021. There have been an increasing number of data compromises for which the reason is unknown, amounting to 37% of all known data compromises during that time. Researchers raised alarm over the likelihood that this pattern would persist throughout the upcoming year.

It’s also a reminder that we need to do better when it comes to protecting our personal information. In this blog post, we will take a look at the dispute between the US and cybersecurity authorities and what it means for data breaches. We will also discuss what you can do to protect yourself from being a victim of a data breach.

Due to this disagreement, both sides have targeted rules that they believe will help them get the information that they need. The US has focused on trying to get access to foreign databases, while the cybersecurity authorities have tried to get access to US databases. This disagreement has led to a stalemate, with neither side being able to get the information that they need.

The majority of businesses rely on their own security monitoring infrastructure to find out whether their hosted cloud solutions have been compromised. This report is based according to a 451 Research survey of senior IT executives. The majority of respondents record 54.6% to the “Voice of the Enterprise: Information Security, Budgets & Outlook 2022”. It claimed their security monitoring infrastructure is the most likely means they will practice the safeguarding procedure.

The US Cybersecurity and Infrastructure Security Agency (CISA) and the Federal Bureau of Investigation (FBI) are in dispute over which agency should have responsibility for investigating data breaches. The disagreement between the agencies has led to a lack of information about many data breaches that have occurred in the US.

CISA is responsible for protecting the country’s critical infrastructure from cyberattacks. The agency also works to improve the security of federal computer systems and provides support to state and local governments on cybersecurity issues. The FBI is responsible for investigating crimes that involve computers and other electronic devices.

The dispute between the two agencies

The American Privacy and Data Protection Act is another bill dealing with reporting disclosures. It is still being debated in Congress as to whether federal omnibus privacy legislation to safeguard against privacy breaches should supersede particular state laws. This bill is under process. If the bill is approved, the FTC would be instructed to establish several regulations for safeguarding consumer data, including those requiring processes “to detect, respond to, or recover from security events or privacy breaches.”

The US and cybersecurity authorities have been at odds for years, with each side accusing the other of not doing enough to protect against data breaches. The latest disagreement between the two agencies centers on whether the US should be required to disclose all data breaches to the public. The US argues that this would allow criminals to take advantage of the situation, while the cybersecurity authorities believe that it is necessary to ensure that people are aware of the risks.

Even though data breach records are incomplete, we can still learn from them. By understanding what has happened in the past, we can better prepare for future attacks and protect our information. Cybersecurity is an important issue, and it should be taken seriously by everyone.

The Cybersecurity and Infrastructure Security Agency, or CISA, is mandated under a law passed by Congress in March to develop guidelines for breach notifications. However, only organizations that own or manage vital infrastructure are covered by the statute.

Because of its position in interacting with cybersecurity stakeholders, CISA, according to Sheldon of CrowdStrike, is the best agency to develop complete standards. But at the same time, many organizations require assistance from private-sector businesses like CrowdStrike to apply safeguards. Cyber security infrastructure security agencies throughout the globe should work as a whole to bring in the majority the cyber security awareness.

Following a proclamation by President Biden, October is regarded the as a time for the public and private sectors to collaborate to continue raising awareness about the significance of cybersecurity. This provides the American people with the tools necessary to be safer and more secure online. The Cybersecurity and Infrastructure Security Agency (CISA) launched Cybersecurity Awareness Month. By spotlighting the steps that all Americans can take to raise the bar for cybersecurity across the nation, CISA, in collaboration with the National Cybersecurity Alliance (NCA), will showcase what it means to “See Yourself in Cyber” as the theme of awareness in October. The Data Security Council of India (DSCI) also came up with promoting the logo of Cyber Security Awareness month.

Ransomware Attacks and Response: What You Need to Know Now

How helpful is Digital for marketing your business?