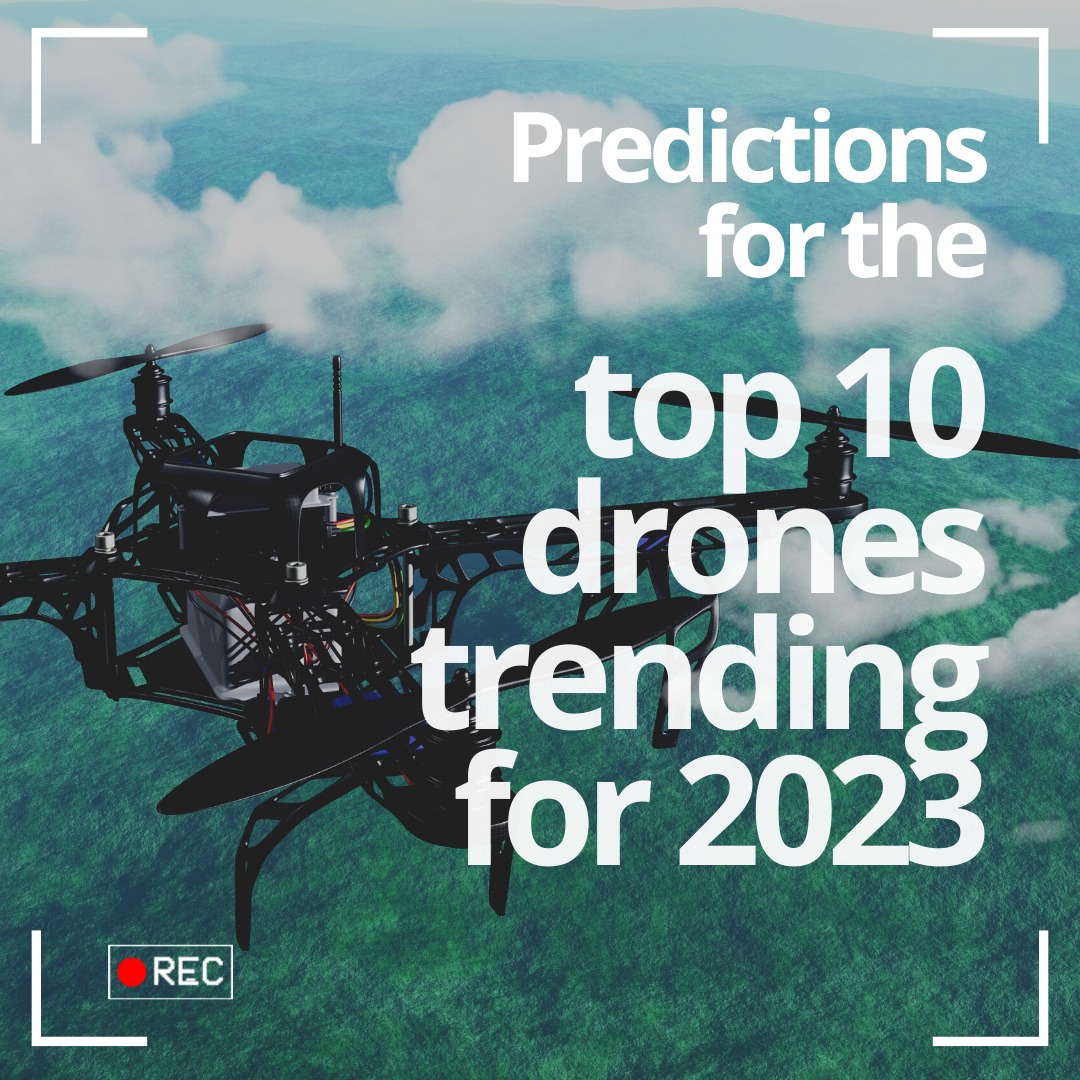 We are in an era where technical advancement along with safety remains the top priority. Any unmanned aircraft can simply be called a drone. The official name for drones is unmanned aerial vehicles (UAVs) or unmanned aircraft systems. A drone is essentially a flying robot that can be remotely controlled. They fly on their using flight plans that are controlled by software and onboard sensors and a global positioning system (GPS). Before finding the predictions for the top 10 drones using areas of 2023, we simply understand what these drones are meant for.

Why do we need drones to fly?

Flight mode and navigation are the two fundamental drone functions.

Any type of Drone requires a power source. These can be a battery or fuel, to fly. They also have a frame, rotors, and propellers.

Drones need a controller, which enables the user to launch, steer, and land the aircraft via remote controls. Radio waves, such as Wi-Fi, are used by controllers to connect with the drone.

What are drones primarily used for?

Drones may currently do a variety of tasks, including delivering packages, taking pictures and videos, searching for people after natural catastrophes, and monitoring climate change. However, the military’s use of them for reconnaissance, surveillance, and targeted assaults is their most well-known and contentious application. Drones

What is FlySafe by DJI?

The GEO zones that forbid flight are placed around places like international or national airports, power stations, and prisons.

Can we fly Drones in drones in national parks?

The answer is No. In any of the National Park Service that oversees and manages, here drones are strictly prohibited. These areas comprise national rivers, monuments, parks with historical significance, etc. Since June 2014, unmanned aircraft cannot be launched, landed, or operated on National Park Service lands and seas.

What common characteristics and parts exist in drones?

Numerous parts make up drones, including:

The top ten fields where drones can bring havoc changes are discussed below:

LiDAR is also known as light detection and ranging. It is a technique for identifying objects in real space and measuring distances by firing laser pulses at the surface and timing how long it takes for the light to return to the sensor. Airborne LiDAR Drones have many uses in Construction work, in the fields of archaeology, minerals search in mining fields, environmental sciences, and many other businesses and organizations.

There is a concept known as a digital twin, which is a virtual representation of a physical object that offers an almost perfect reproduction, including a scaled size and location.

Drones can deliver several datasets that can be used to build a precise as well as a comprehensive digital twin. They make it simpler to collect data fast and safely, and they can accommodate any kind of sensor.

Drones can increase the efficiency of digital twins because they can take a close-up 360-degree video of the physical asset and rapidly and efficiently collect the data required to build the digital twin, even from assets that are hard to access in some places. You can capture any dataset anywhere with drones.

Drones are being used widely by Amazon for self-driving deliveries. Many other businesses will increase their use of drones as a result of the accelerated expansion of e-commerce and online deliveries. In addition, the shortage of delivery drivers seems to be propelling the drone service to new heights.

Local and international news networks typically rely on helicopters and traffic cameras to report on traffic conditions and auto accidents. Recently more and more news organizations are turning to drones to get the footage they need. Drones can fly closer and provide a more comprehensive perspective than a “bird’s eye view” of disasters and traffic accidents while also saving time, resources, and money

Drones in the Commercial sector

Stills and movies are among the most frequently used outputs for commercial drone work. The FAA relaxed its guidelines in April 2021 to allow for the commercial use of tiny drones These could be for high-end cinematography for work in filmmaking, professional photography and videography, aerial shots of real estate to help sell it, or even for professional photography and videography. Previously, without an FAA waiver, any unmanned aircraft were generally not permitted to fly over people. It is applicable also for drones to fly at night, or be out of the operator’s line of sight. However, as rules are being relaxed and drone use grows in the commercial sector, the technology is about to become widely employed.

Drones for Following up on Solar Farms

According to experts, businesses will start aiming to adopt solar energy as of 2022, therefore multiple solar farms will be created to support this goal. However, it might be extremely difficult to maintain and run such remote and dispersed locations. Such farms may be continuously checked for maintenance, temperature analysis, and potential problems by deploying autonomous drones with thermographic imaging capability.

Drones in the Management of Oil and Gas Facilities

It is possible to efficiently monitor oil and gas facilities to guarantee both plant and environmental safety. Autonomous industrial drone systems can be utilized locally to check and monitor dangerous locations as well as easily accessible areas, protecting personnel. To avert calamities or prepare for them, drones are also highly effective and powerful at spotting anomalies like leaks and temperature spikes.

In the tech sector, the “As a Service” concept has gained a lot of traction. In a similar vein, corporations are using drones-as-a-service models, which are also gaining significant traction, to improve operational efficiency. By incorporating specialized software into the embedded system, drones can help a variety of industries. It includes mining, civil construction, aviation, and others.

Drones are widely employed for threat assessment, surveillance, and data collection. Due to these characteristics, paramilitary organizations, who are employed by border security, and law enforcement agencies can effectively battle many forms of criminal activity with them. Drone operations also support military use cases and they include surveillance, hostage situations handling, responding to bomb threats, etc.

Operators of port terminals will use autonomous industrial drone systems. These can help to keep an eye on nearby coasts, offshore crane and freight operators, and any port gates entry and exits points. Such drones can monitor, identify, and alert about questionable activity autonomously, doing away with the need for human oversight or potentially placing people at risk.

Drone Models that will hit the market in the year 2023.

It is a basic, lightweight, and easy indoor drone. It has propeller guards that are reasonably priced. The Tello has plenty of features like In-built collision detectors despite its low price and 13-minute battery life, making it a fun drone for beginners. The DJI Ryze Tello is a little drone that can stream 720p HD video and shoot 5MP pictures. It has an integrated nose-mounted camera.

This drone has wide-angle, 180-degree, and sphere panoramas available for selection. DJI Air 2s can cover up to 10 kilometers can be covered by HD video transmission with this technology.

The DJI Mavic Air 2 has a 4K 60 fps video capture capability. This drone can also record 1080p slow-motion footage at 120 and 240 frames per second. The new camera surpasses current DJI consumer models by recording video at a bitrate of 120.

The Zipline drones can go more than 60 mph, have a round-trip range of around 100 miles, and can fly in all weather conditions, including high-speed winds.

With the best ready-to-fly racing drones and drone parts, NewBeeDrone caters to both novices and experts. Customer assistance in this type of drone is quick and responsive.

Dart Drones offers online drone pilot training for those who wish to learn how to fly a drone in addition to passing the written test and obtaining their license. For students to succeed, this course offers access to flying instructors, a money-back guarantee, and lifetime access.

A framework called NLD Mod Client enables you to modify your drone without having to worry about anything.

Next DJI event: On September 14, 2022, DJI’s next Dji event was held. It was a product launch event, It came with the caption “Action 3,” the corporation says it’s “seeking people who go further.”