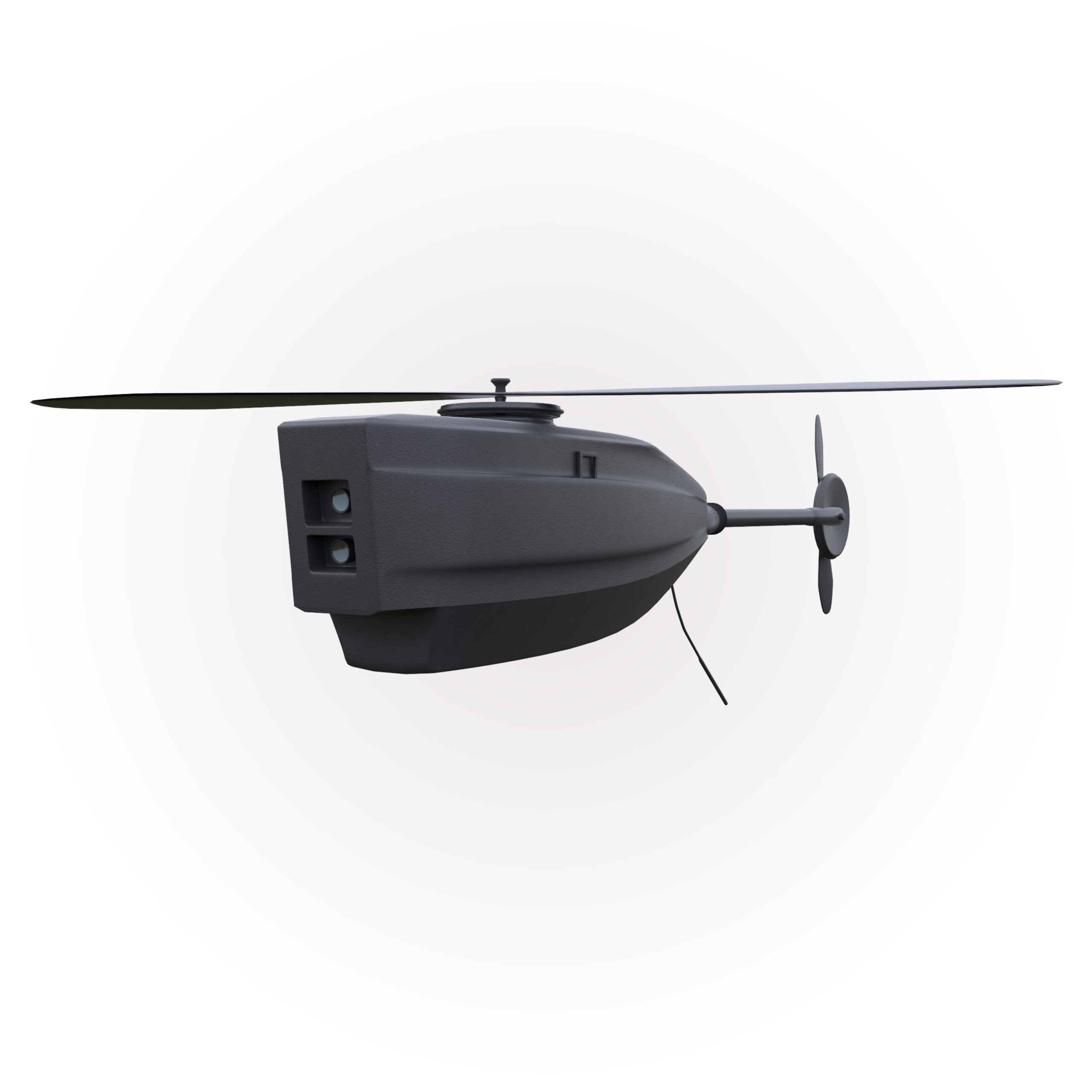 Microdrones, while seeming like harmless toys, could be used as weapons of mass destruction. These mini military drones can be fitted with explosives or other harmful substances, making them a serious threat. One type of microdrone, the Black Hornet, is just 3 inches long and can fly for up to 25 minutes.

Britain stated in August that it would deliver 850 Black Hornet “microdrones” to Kyiv for use in close-quarters fighting.

Before Russia’s spectacular collapse in recent weeks, the plan was that they would provide Ukrainian forces a critical advantage in the fierce urban combat they might expect as they attempted to recover their towns and cities.

These devices are a far cry from the massive unmanned aerial vehicles (UAVs) used in the war on terror, such as the omnipresent Predator and Reaper drones that brought death from the sky with a casualness that was almost divine.

What are Black Hornets?

Basically, Black Hornets are more similar to a toy for kids. They will practically look around corners and slip through windows, measuring just over six inches and weighing a little less than a plum.

They can sneak up on the adversary, infiltrating any remaining Russian defensive positions and compounds, and transmit back high-definition footage and stills via three cameras positioned in the nose, thanks to their minimal rota noise.

A frontline soldier controls the Hornet using a small iPad-style screen and a hand controller that wouldn’t be out of place on a video game system from the 1990s. It provides soldiers with situational awareness and the capacity to “see over the hill” — without having to send some poor unfortunate to the top — for a cost of £10,000 per unit that will only decrease with time.

Associate Editor of The Telegraph Dominic Nicholls is well conscious of the need for a second set of eyes. He conducted multiple missions with drones of different sizes, including those in Afghanistan and Iraq.

“The drones I worked with allowed us to make decisions based on the best available real-time information,” he says. “That might have been selecting the best helicopter drop-off points for soldiers assaulting a position, or talking other assets on to potential threats.”

The military is already finding uses for mini military drones that were formerly dismissed as science fiction, much as we may soon be employing them in everyday life to carry products.

In particular, Ukraine provides a highly visible example of its adaptability as well as a view into the future.

The fight has inspired a modest revolution in drone invention, with commercial and household models—many of them provided by the West—being hacked and modified to deliver lethal force. This is the first major war to be played out in real-time on social media.

Now, it’s routine to visit Twitter and watch the video of a modified drone throwing a grenade through a tank hatch or onto a bivouac of the sleeping Russian army that was captured last year during your wedding. This has, according to intelligence, probably not been great for morale. The invaders are gazing up as well as ahead because they feel pursued.

In summary, drones are winning the fight. They are, without a doubt, our future. And what’s not to admire if the robots can assist technologically superior countries like the West and its allies win fights without using their troops?

Well, if a growing group of extremely distinguished scientists is any indication, quite a lot. They query what will happen if the machines become very efficient.

They may respond to Ukraine’s ostensibly favorable example with Libya and Gaza. This is due to the fact that these are the places where, in addition to the normal atrocities, it has lately been believed that Black Hornet nano drones killed people not just intentionally but also autonomously, without human supervision.

You might say that they are just blips on the radar. But a moral boundary is being crossed all around the world. The availability of more affordable and capable unmanned aerial vehicles and the artificial intelligence powered by smartphone demands have accelerated the march toward the long-foretold age of the killer robot.

Do we understand what we unleashed, then? And will it already be too late by the time we figure it out?

It is important to comprehend what devices like Black Hornet 3 cannot achieve in order to make the argument.

Defence Secretary Ben Wallace referred to the UK’s aid measures as “cutting-edge” while announcing them. However, even a lousy graduate student in computer science would roll their eyes at it. Why? Due to the fact that it is ignored that the Black Hornet still requires a soldier to put himself at risk by approaching the enemy at a close enough distance (less than 2 km) in order to pilot it into place, and once there, the drone can only function passively as a reconnaissance tool. In other words, it cannot act independently and cannot kill.

But things are rapidly shifting.

At a United Nations diplomatic meeting in Geneva in 2017, a short video had its world debut that, to put it politely, raised some eyebrows. The Future of Life Institute’s award-winning short film Slaughterbots depicted a fictionalized version of a tech presentation in the vein of Steve Jobs that unveiled a microdrone that could fit in the palm of your hand.

The machine playfully evaded the presenter’s attempts to catch it as the audience applauded and laughed. It appeared to dance in the air even when he didn’t try to, seemingly showing its “stochastic motion” anti-sniper capability.

The best part? “It’s all AI,” the presenter says smugly in the film. “It’s processor can react 100 times faster than a human.” In other words, it controls itself. He goes on: “Just like any mobile device these days, it has cameras and sensors, and just like your phones and social media apps, it does facial recognition.”

He then shows that there are three grams of “shaped” explosive within the little four-rotor drone, which has now softly landed in his hand.

After being launched into the air, it quickly regains its bearings and charges like a lightning bolt at a nearby mannequin, punching a little hole in its forehead. We are informed that “that small boom” is sufficient to enter the skull and destroy its contents.

A small, affordable drone that uses face recognition to choose and kill a target while completely uncontrolled by a person is rather disturbing.

Of course, Slaughterbots is not a documentary. How far away are we from the genuine thing, though?

Stuart Russell, a computer science professor at the University of California, sponsored the 2017 movie, which now has more than 75 million views.

He doesn’t come off as a typical or garden doom monger, maybe it’s his measured British accent or the carton of PG Tips sitting in his Berkley office as we speak through Zoom. He actually has a position among the top minds in the world in this area and spoke at the Reith Lectures last year on the topic of coexisting with artificial intelligence.

The important thing, in his opinion, is that the technology needed to create a deadly microdrone of the kind seen in the movie already exist. They just need to be combined, reduced in size in certain parts, and enhanced.

“There are some technical issues in miniaturisation which have to do with batteries and range and how much onboard power you need to support the computer processing you need to have a fully autonomous system,” he said. “But really that’s an engineering task. There’s no science fiction stuff that needs to happen. On most of that we’re already there.”

Instead of utilizing a standard purpose chip, you would likely construct your own Application-Specific Integrated Circuit (Asic), which is lighter and more power-efficient, in order to create a genuinely high-performing microdrone. But you can certainly do it.

A lot of the technology that would allow that microdrone to find you and then determine whether or not to murder you already exists on your smartphone, according to the fictitious Slaughterbots presenter. This technology includes cameras, face recognition software, and GPS.

The movie would have been spooky enough to finish there. However, it goes on to depict the gadgets working together as a group, or “swarm,” to track down a number of alleged bad individuals. And this is indeed the idea behind the armed microdrone. One may be incredibly unpleasant on their own, but in a well-organized group, they could be a complete nightmare.

AI computer systems may be “taught” to control a group of drones that work together to penetrate walls, trains, and automobiles. These can radars detect drones that would be almost bulletproof and less susceptible to electronic jamming because they wouldn’t be operated remotely.

The Transition to E-Commerce: How Retail Cybersecurity is Changing

“Work Smart not Hard”: the key to be successful in this New Generation