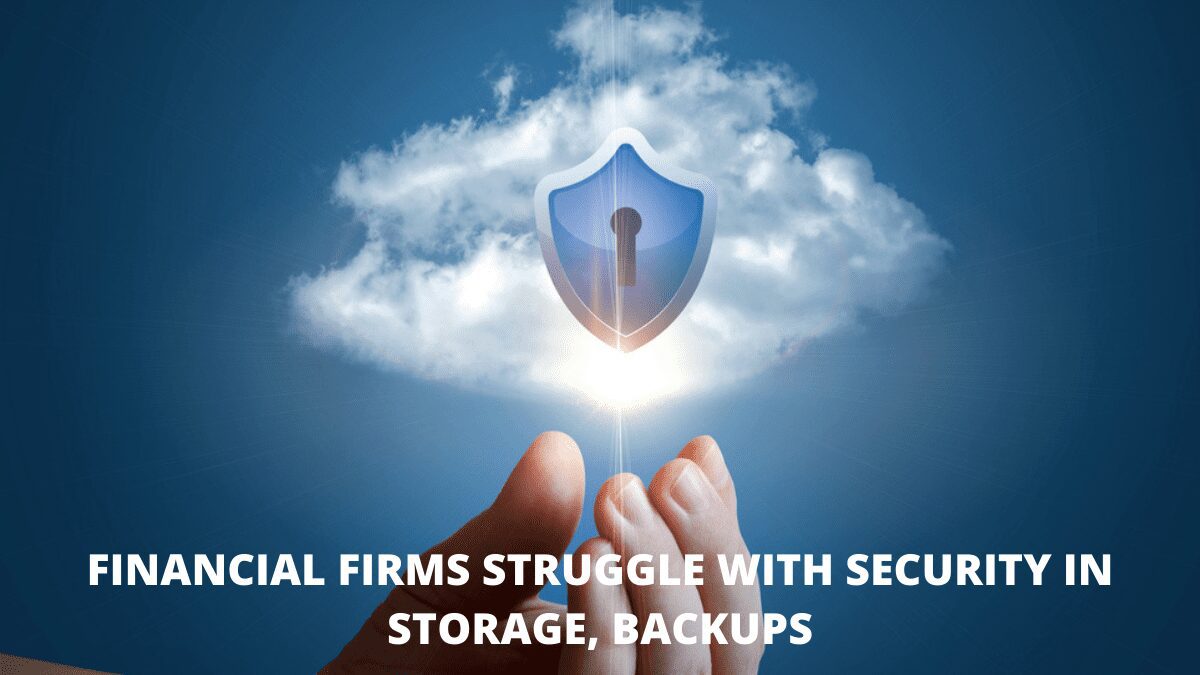 The majority of financial service institutions (FSIs) are having problems properly safeguarding their stored data, which is concerning considering the growth in ransomware assaults.

According to research released in December by Continuity, a data storage company, nearly seven out of ten FSIs (69 percent) believe a breach of their backup or stored files would have a “major” or “catastrophic” impact on their business.

Moreover, despite their backup efforts, three out of five respondents have doubts about their ability to recover from a ransomware assault.

Continuity’s assessment of 200 FSIs across 45 countries found that many, if not all, FSIs have yet to reach a “mature” level of data storage and backup, despite the increased reliance on data backups in light of ransomware attacks that force enterprises to revert to their backed-up information.

It’s easy to mistake FSIs for data companies… Everything is ultimately digital, even money itself. Kill the data, and the company will perish. “Remove the backup data, kill any hope of recovery,” says David Blaszkowsky, Helios Data’s head of product and regulatory relations. “Attacking data is like attacking a social media company’s web connections: what do you have left after the attack but empty screens?”

Keeping Up With the Competition

Most FSIs have backup and storage security measures in place, as Blaszkowsky points out, “but the attackers are so much smarter and more motivated.” “Ill-prepared” isn’t the appropriate word, but FSIs aren’t well-positioned to handle rising ransomware assaults. Indeed, according to Continuity’s poll, more than half of FSI respondents (52%) were not “highly confident” in their storage and backup security, and one-quarter (25%) were “extremely concerned” (having little or no confidence in their data storage security).

According to the Continuity report, “when corporate data is compromised, the storage and backup infrastructures are the last line of defence.” The volume and sophistication of data-centered attacks, particularly ransomware, has increased alarmingly in recent years. The value of digital data in the financial and banking industries might be so large that a well-coordinated attack on both storage and backup could wipe out a significant portion of the organization’s value, potentially affecting entire economies. ”

However, there are grounds to be optimistic about the future. despite the fact that storage (57 percent) and backup systems (47 percent) were the two lowest focus areas of organisations’ vulnerability management. More than two thirds of continuity survey respondents said that “securing storage and backup systems has been specifically addressed in recent external audits.” Changing priorities on a regular basis (44%), organisational silos (42%), and a lack of trained personnel (42%).

In their efforts to provide adequate storage and backup security, 41% of FSI respondents listed these as important problems.

The fact that so many recent ransomware attacks have succeeded, as well as the alarming percentage of organisations that have chosen to pay to get their data back rather than rely on their own capabilities, highlights the urgency of the hour, said Doron Pinhas, CTO of Continuity, in a prepared release. “The findings of this analysis reveal the financial sector’s severe issues,” Pinhas stated. Most enterprises are several steps behind in the race against modern data-criminals, cyber-terrorists, or hostile nation-states when it comes to securing storage and backup systems.

This is “one of the reasons why compliance regulations such as the NYDFS Cyber security Regulation (23 NYCRR 500) exist,” according to Nick Santora, CEO of Curricula. Credit unions, state-chartered banks, and other service institutions must now comply with these criteria for covered businesses because we all know that a data breach affecting an institution’s data occurs “not if, but when.”

As a result, incident response planning, according to Santora, is critical for risk minimization. Every firm will encounter a security incident sooner or later, especially since phishing and social engineering cyber-attacks are only growing worse now that so many individuals work from home. “Knowing how to respond to the circumstance is crucial.”

A Backup Strategy That Could Be Wrong

Given a possibly poor approach to backups, some industry experts point out that there are foundational reasons why this might be happening.

Gula is co-founder and former CEO of Tenable Network Security and president of Gula Tech Adventures, a firm that invests in cyber security start-ups. He says he agrees with the report’s findings in general. When I was operating Tenable, Gula recalls, “We often ran into clients who felt backup systems were too important to scan or fix.” “I still come across companies that are focused on zero trust and authentication but not on the underlying security of their SaaS and on-premise apps.”

Gula offers two possible adjustments to reduce cyber-attacks on storage systems and their impact on FSIs on that goal. He mentions Gartner’s recent creation of a new “cyberstorage” category, which “integrates a range of security methods directly with the storage,” according to Gula. While most businesses are obliged to layer in many vendors and solutions in order to “have financial market data that actually defends itself against insiders and ransomware,” cyberstorage has it all built in at a lower cost and complexity than dealing with numerous solution providers.

He also proposed that FSIs conduct training exercises using “adversary emulation platforms” to see how well their blue teams can detect persistent attacks on their data storage infrastructure. “They’ll probably discover that their current Data Leak Protection software is focused on endpoints and is oblivious to bulk storage, sensitive data in motion, and sensitive data stored on SaaS platforms like Slack and Office 365,” Gula says.