Emotet Trojan returned after the takedown: detected in Japan 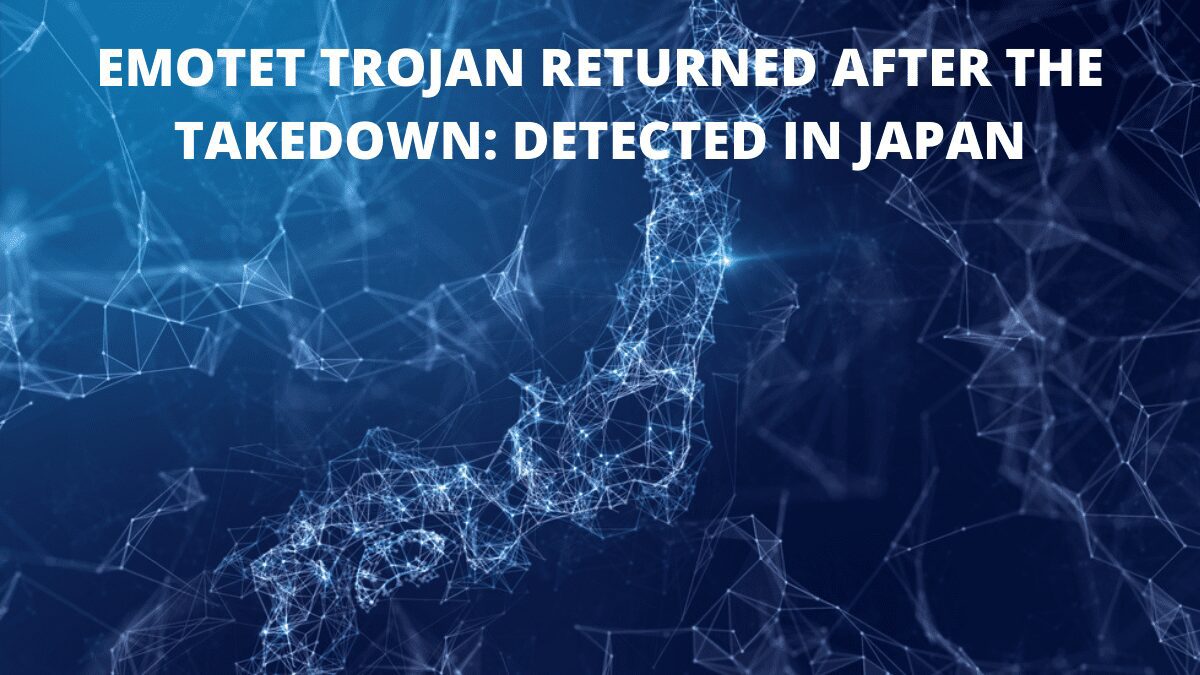 The Emote virus, widely regarded as the most destructive malware in the world, has reappeared with new campaigns and was recently discovered infecting machines in Japan. Despite the fact that it has previously been taken down by international law enforcement operations. The threat appears insurmountable. Emotert used phishing techniques to infiltrate the email boxes of several companies in Japan. At least nine different types of malware-laced files were found to be attached to the emails. Malware is now being transmitted via malicious Windows App Installer packages posing as Adobe PDF applications.

The Emotet trojan is a virus that spreads by phishing email campaigns including malicious attachments. When malware is dropped on a machine, it can collect emails, credentials, and launch malware like TrickBot or Qbot that was previously delivered. These operations may result in the distribution of ransomware or the launch of new spam email campaigns.

According to reports on Emotet, infections are currently occurring as a result of malicious packages being installed utilising the built-in capability of Windows 10 and even Windows 11. App Installer is the feature, and it has already been seen in earlier trojan and malware operations.

Researchers were able to evaluate the attacks and how they flowed thanks to the trojan samples, which began with a phishing effort. The malware spreads thanks to stolen emails via reply-chain attacks. Respondents are instructed to interact with the email attachment, which contains a link to a PDF file that is ostensibly linked to the email chat.

Because the URL is coded and truncated, there are no warning signs or questionable material to make you suspect. When the associated link is clicked, the user is taken to a Google Drive page with a PDF preview button. After that, the false document should be displayed. The ms-app installer URL, which initiates the app installer file from Microsoft Azure, is the landing page that prompts customers to view the PDF.

The Trysted App is a software package that also includes a valid certificate marker. This validation may be sufficient for users, but it may aid criminals in falsifying the publisher’s information. The installation of the malicious package begins once the Install buttons are clicked. On the machine, several DLL files and executables are dropped.

The introduction of the most destructive trojan is simply the beginning

One of the most deadly and widely circulated malware components is the Emotet trojan. The rebuilding process began a few months ago, and TrickBot trojans and other malware aided in the trojan’s relaunch of new spam campaigns. Various emails with malicious documents containing harmful scripts can be sent to [6] mailboxes. The only requirement for the infection to begin is for the user to interact with the attachment.

Emotet assaults frequently result in the deployment of ransomware. This is a huge problem for businesses, government agencies, and other groups. Administrators of such networks must stay on top of their defences in order to halt virus spreading tactics. To avoid Emotet infiltration, regular staff and ordinary consumers should be aware of these campaigns