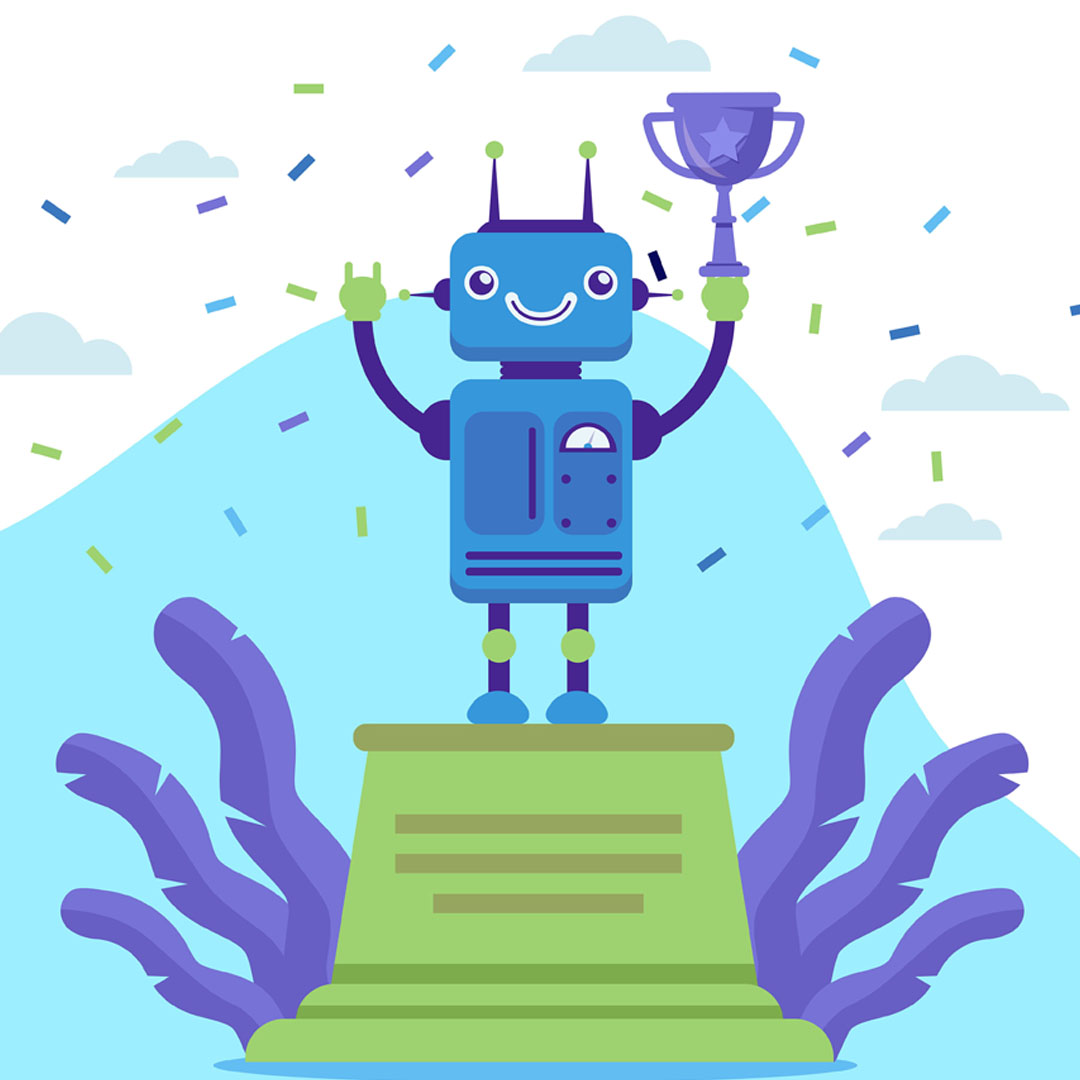 Best AI Technology leaders are Google, Amazon, IBM, Microsoft, Salesforce, Oracle, NVIDIA, Intel, SAP, and Adobe. The global artificial intelligence market is expected to grow from $2.9 billion in 2019 to $19.6 billion by 2024, at a CAGR of 42.6% during the forecast period. The growth of the artificial intelligence market is driven by the increasing demand for intelligent virtual assistants, such as Amazon Alexa and Google Home, and the increasing adoption of AI-based technologies by enterprises.

According to Zion Market Research, The global artificial intelligence market is anticipated to increase from $59.7 billion in 2021 to $422.4 billion by 2028. Robotics, automation, and AI are causing disruption in almost every business. Companies that don’t invest in AI-related products and services risk becoming obsolete in various industries, including machine learning, smart applications and appliances, digital assistants, and autonomous cars. Many firms stand to gain from AI, but only a select few equities have automation and AI at the core of their operations. Here are the top 10 Leaders in AI companies recommended by Bank of America.

Top 10 of the best Leaders in AI companies:

Microsoft stated that a new supercomputer would be built and housed on its cloud computing network, Azure, in 2020. The supercomputer was developed in partnership with OpenAI to train AI models, with the end result being the creation of sizable AI models and associated infrastructure for developers and other businesses. Microsoft introduced Microsoft Designer in October, a graphic design tool that employs artificial intelligence (AI) to generate original social media posts, invitations, and other graphics. According to analyst Brad Sills, Microsoft is well positioned to generate double-digit revenue growth for at least the next three to five years, even at a $1.6 trillion price. MSFT stock, which ended on November 10 at $242.98, gets a “buy” rating and a $300 price target from Bank of America.

The parent firm of Google and YouTube, Alphabet, employs AI and automation in almost every aspect of its operations, including Gmail spam filters, content promotion, and ad pricing. Additionally, it is the parent company of Waymo, a maker of autonomous vehicles, and DeepMind, a subsidiary of AI in Logistics software that made history by becoming the first completely driverless commercial taxi service to operate on public roads in 2020. According to analyst Justin Post, Alphabet’s shares are fairly valued. The company faces little competition in the search market, generates a sizable amount of cash flow that may support share repurchases, and is a great defensive investment in a volatile market. GOOGL stock, which ended at $93.94 on November 10, has a “buy” rating and a $114 price target from Bank of America.

Every facet of Amazon’s business, including targeted advertising, e-commerce search engines, and Amazon Web Services, incorporates AI integration. One of the most well-liked virtual assistants is Amazon’s Alexa, which is already present in many American homes. Additionally, Amazon provides a wide range of AI in manufacturing services to users of the AWS cloud, such as chatbots, sophisticated text analytics, and automatic code reviews. Amazon announced in August that it will acquire home robots company iRobot Corp. (IRBT) for $1.7 billion. This move might enable Amazon to increase the presence of AI in homes throughout the world.

Advanced AI applications require a lot of computing power, which high-end chipmaker Nvidia offers. In fact, Nvidia graphics processing units power Leonardo, one of the fastest supercomputers in the world. The world’s largest AI supercomputer is being constructed by Facebook’s parent firm Meta Platforms Inc. (META), which also owns 6,080 A100 NVDA graphics processing units and Nvidia’s Quantum InfiniBand networking technology. Due to national security concerns, the U.S. government has blocked the sale of Nvidia’s latest H100 and A100 AI processors to China and Russia. According to analyst Vivek Arya, Nvidia is a crucial supplier for high-growth industries, including high-end gaming, AI in entertainment purposes in graphics, cloud computing, artificial intelligence, and sophisticated automotive technologies.

For years, IBM has been working on methods to transform academics, banking, law, and health care using its AI supercomputer Watson. Unfortunately, IBM sold up its healthcare data and analytics assets in early 2022 after its Watson-powered genomics and cancer efforts failed to live up to expectations. The AutoML and AutoAI tools from IBM, which continue to dominate the industry in other AI technologies, may assist data scientists in creating and refining AI and machine learning models. According to analyst Wamsi Mohan, IBM has a strong product line and a tempting 4.7% dividend. He predicts that IBM’s current sales and free cash flow recovery will continue. The IBM stock, which finished at $141.23 on November 10, has a “buy” rating and a $145 price target from Bank of America.

The da Vinci Surgical System, which is offered by Intuitive Surgical, uses cutting-edge robotics and digital imaging technologies to carry out minimally invasive procedures. Intuitive is striving to use big data and AI to provide solutions like improved training and real-time advice for surgeons. Despite the fact that it has been 22 years since the U.S. Food and Drug Administration authorized the da Vinci Surgical System, Intuitive reported a 13% increase in installed systems year over year in the most recent quarter. Given its potential to diversify into a wider range of surgical procedures, analyst Travis Steed believes Intuitive is among the best-positioned businesses in the medical technology sector. The ISRG stock, which ended Nov. 10 trading at $257.86, has a “buy” recommendation from Bank of America with a $250 price target.

Workday is a supplier of cloud-based applications with a human resources management focus. Businesses can handle hiring and staffing difficulties, shifting labor demand, shift scheduling and prioritizing, and more with the aid of Workday’s unique AI-based optimization engine. Workday included Barista, an based on AI in retail industry, virtual assistance agent from Espressive, into their platform in April 2022. According to Sills, Workday will achieve considerable operating leverage through 2024, including operating margins of at least 20% and free cash flow margins of at least 25%, and increase revenue by at least 15% yearly. Additionally, he claims that high renewal rates will aid in increasing Workday’s profits. WDAY stock, which ended at $153.13 on November 10, has a “buy” rating and a $220 price target from Bank of America.

Data analytics software provider Palantir Technologies uses AI. Palantir was ranked as the top Global Artificial intelligence market software platform by revenue and market share by IDC in September 2022. The intelligence and defense sectors of the American government account for a sizable portion of Palantir’s revenue. In order to help the U.S. Army Materiel Command implement AI and machine learning technologies to increase equipment dependability and predictive maintenance, as well as streamline supply chains, the business just signed a new $85.1 million deal. Palantir has a long-term development opportunity, according to analyst Mariana Perez Mora, given the fast growing need for both commercial and government AI in banking sector systems. The PLTR stock, which ended on November 10 at $7.64, has a “buy” rating and a $13 price target from Bank of America.

Observability and infrastructure monitoring are two services provided by Dynatrace. 368 trillion dependencies may be examined per second using the company’s Davis AI engine. In a matter of seconds, Davis can identify issues in a corporation’s digital environment, offer context for what went wrong, and identify and rank probable business repercussions. According to analyst Koji Ikeda, Dynatrace has a sizable and expanding addressable market and is expected to increase revenue by at least 20% annually through at least 2025. Additionally, he claims that the firm stands apart from less prosperous competitors thanks to its large margins. The DT stock, which ended the day on November 10 at $36.75, has a “buy” rating and a $45 price objective from Bank of America.

By automating time-consuming and repetitive procedures, UiPath produces robotic process automation or RPA, technology that enables businesses to increase productivity and cut expenses. Software robots can carry out duties including reading documents and emails, analyzing language and imagery, and comprehending the substance and purpose of communications thanks to UiPath’s AI technology. AI in telecom robots can also solve contradictions, execute cognitive tasks, and navigate complex environments. According to Sills, the RPA industry is worth around $38 billion, and UiPath has distinct advantages over competitors thanks to its proprietary computer vision technology and its extensive portfolio of bot technologies. PATH stock, which ended at $11.87 on November 10, has a “buy” rating and an $18 price target from Bank of America.

The most dangerous browser in 2022 is Google Chrome with 303 vulnerabilities: Atlas VPN

What Are Data Centers and Why Are They Important?