Python To Take Your Business To The Next Level? 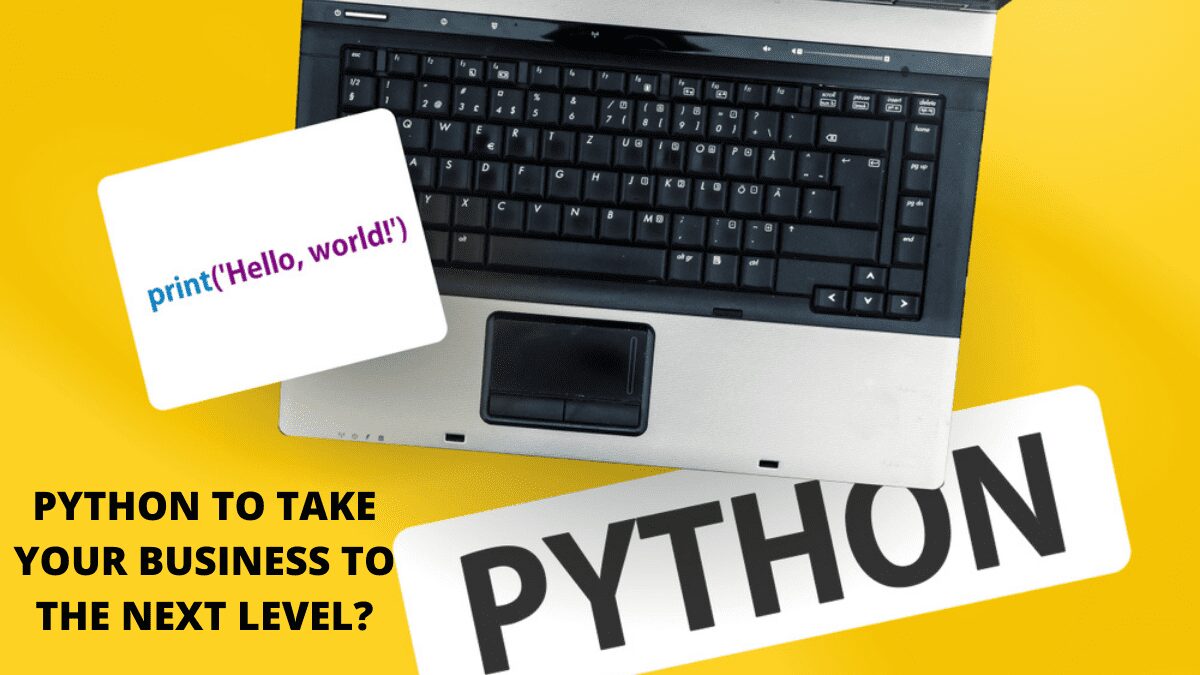 The popularity of programming languages fluctuates throughout time. Some languages achieve a great deal of popularity quickly and then fall out of favor. However, Python’s popularity has not waned over the years and is still a favorite among developers today.

Python was created in the 1980s by Guido Van Rossum. This is an open-source programming language with a focus on legible code. It doesn’t require a compiler to function and includes an interpreter which lets programmers rapidly execute and display the consequences of their modifications. Python may be installed on any device or platform. A few Python features that make it a developer’s favorite are listed below.

Python was designed to be simple to learn and use. It features an easy-to-learn structure, making it a preferred language for educating introductory programming.

Python may operate on a variety of platforms, including Windows, Linux, Mac OS, and mobile devices. It is not necessary to rebuild time-consuming programs.

Python is open-source, which means anybody can download it for free, even if you plan to use it commercially. It is simple to download from the official site.

Although it is a high-level language, Python is separated from the hardware of the device to make it easily understandable. It features an easy-to-read syntax which makes programming and debugging a breeze.

Python is extensively used by businesses and startups to automate company activities and create robust software and online applications.

Python is a widely popular programming language with a large community of supporters. It provides a plethora of libraries with failsafe prepared modules. Python allows software developers to incorporate even the most complex features without sacrificing code clarity.

Python’s readability, as well as portability, contribute to a more efficient development process. It shortens the time it takes for web applications to reach the market. Furthermore, because it does not require a compiler, new and updated code may be run quicker than in languages that require recompilation with each new update.

Python is simple to maintain and extend because of its flexibility and scalability. You may also customize code packages then reuse those across many projects. It is also a very flexible language that may be used for a wide range of activities.

Python’s numerous capabilities make it versatile and robust, and that is why growth-minded businesses rely on it heavily.

Python is a reliable choice for MVP prototyping since it is open-source and is also widely available. It provides vocabularies, lists, and data sets to help developers begin projects rapidly. They may also depend on significant library and community help during the project design stage.

How can Python help you grow your business?

Python’s simplicity of use and adaptability have been attributed to its widespread acceptance across a wide range of sectors. Here are some ways Python may help your business grow:

Python has a large library that may substantially reduce your development cycle and save you time. The majority of these libraries are free to use. For example, if your project involves financial analytics, you may use mathematics as well as statistics libraries like NumPy and SciPy.

When clients add tools like Pandas for organizing data frames, Jupyter notebooks for interactive programming, and Plotly for UI and visualization, Python can be a highly effective analytics and data science platform.

Python could be used for a variety of applications inside the business since it is simple to use and set up. Traditional programmers are not the only ones participating in the development process in businesses today. Different persons, such as executives from other sectors, may be engaged as well. Python promotes better cooperation by allowing for faster development timelines while saving time and money.

Clients have access to a vast resource pool. It implies companies can create their unique analytics as well as reports without relying on an internal development staff. Python’s customizable capability improves corporate agility.

When you use Python, you don’t have to start from scratch every time you require a new feature. Python may be used to enhance bigger systems without requiring a huge investment or a lot of time. This technique has the potential to minimize total operational risk and the error margin. Furthermore, without starting costly development initiatives, this language can also be used to prototype innovative workflows and reporting.

Without a question, Python is the shining star of coding. Python may be used to create anything, from a simple startup website to a sophisticated business web gateway. If you haven’t already started utilizing Python in the business, now is the moment.

Why Are Companies In Search of Full-Stack Data Scientists?