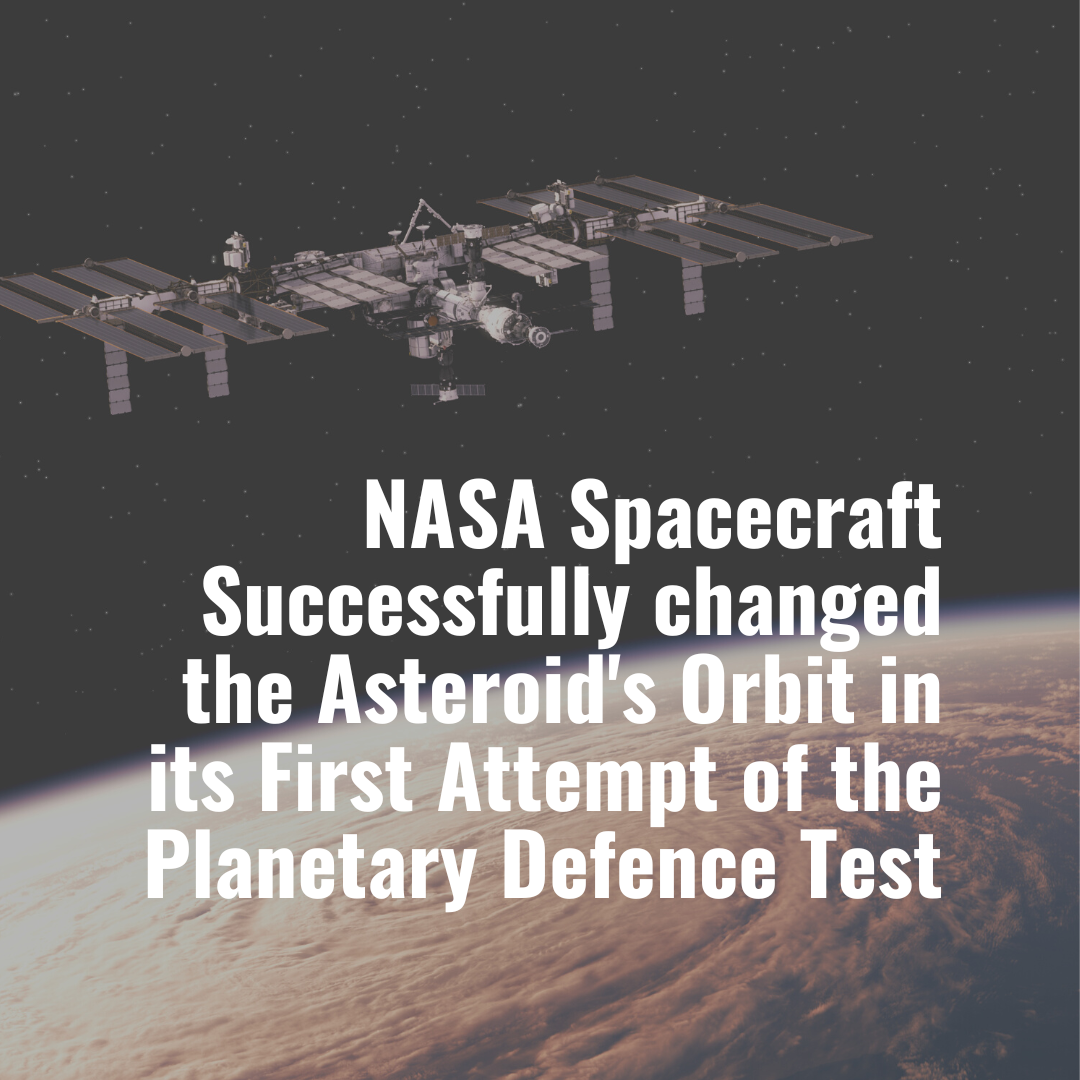 The US space agency announced on Tuesday that the DART NASA spacecraft purposively crashed into an asteroid last month and succeeded in nudging the rocky moonlet from its natural path into a faster orbit. NASA’s new project marked the first time that a human has changed the motion of a celestial body.

NASA said data obtained over the past two weeks showed that the DART space ship probe’s impact with a small, harmless space rock known as Dimorphos did manage to alter its trajectory.

Seven years in development and costing $330 million, the proof-of-concept mission was also labelled the first-ever ever test of a planetary defence system in the World that was designed to safeguard Earth from a doomsday meteorite collision.

“All of us have a responsibility to protect our home planet,” NASA Administrator Bill Nelson said in a statement. “After all, it’s the only one we have.”

The primary goal of the DART NASA spacecraft for the suicide test flight on 26th September, which was to relocate an asteroid by only using sheer kinetic force, was confirmed to have been accomplished, according to the results of telescope observations released at a NASA news briefing in Washington.

“NASA has proven we are serious as a defender of the planet,” Bill Nelson told to the reporters while announcing, adding that the mission was “a watershed moment for planetary defence and all of humanity.” Additionally, he stated, “It felt like a movie plot, but this was not Hollywood.”

The DART space ship was designed and developed for NASA at the Johns Hopkins University Applied Physics Laboratory (APL) in Laurel, Maryland, where the impact last month, which occurred 6.8 million miles (10.9 million kilometres) from Earth, was monitored in real-time from the NASA project operations centre.

Dimorphos, an egg-shaped parent asteroid approximately five times greater than Didymos and around the size of a football stadium, was DART’s celestial target. It orbited Didymos once every 11 hours, 55 minutes.

Astronomers are currently researching cosmic collision’s aftereffects. Particular attention is being paid by researchers to quantifying the amount of momentum or energy that was exchanged between the two objects. The DART impactor vehicle, which was hardly wider than a refrigerator, slammed directly into Dimorphos at the conclusion of the test flight at a speed of around 14,000 mph/miles per hour (22,531 kph).

The orbital period of the Dimorphos-Didymos pair was reduced to 11 hours, 23 minutes as measured both pre- and post-impact, and the smaller object was pushed tens of metres closer to its parent.

Tom Statler, the DART program scientist for NASA, said the collision also left Dimorphos “wobbling a bit,” but additional observations would be necessary to confirm that. The outcome “demonstrated we are capable of deflecting a potentially hazardous asteroid of this size,” if it were discovered well enough in advance, said Lori Glaze, director of NASA’s planetary science division. “The key is early detection.”

According to NASA scientists, neither of the two asteroids nor the DART (Double Asteroid Redirection Test), presented any genuine threat to Earth.

But Nancy Chabot, DART’s coordination lead, said Dimorphos “is the size of the asteroid that is a priority for planetary defence.”

A Dimorphos-sized asteroid might be demolished a major city by it direct strike but are not capable to be a threat to the entire world. According to the scientists’ prediction, the DART collision was expected to abbreviate Dimorphos’ orbital path by at least 10 minutes. Although scientists would have considered a change of even 73 seconds significant. With a standard deviation of plus or minus two minutes, the actual shift of more than a half hour exceeded expectations.

The relatively loose composition of rubble that Dimorphos appears to consist of may be a factor in how much the asteroid was budged by DART’s blow.

According to NASA, the impact produced a recoil effect that increased the force applied to Dimorphos by the collision itself by blasting tonnes of rocky material from the asteroid’s surface into space, shown in telescopic photographs as a gigantic debris plume.

Launched by a SpaceX rocket in November 2021, DART spent most of its mission under the supervision of flight directors on the ground. During the final hours of the journey, control was handed over to the craft’s autonomous onboard navigation system.

Dimorphos and Didymos are both tiny compared with the cataclysmic Chicxulub asteroid that struck Earth some 66 million years ago, wiping out about three-quarters of the world’s plant and animal species including the dinosaurs.

Although according to NASA scientists and planetary defence researchers, the Didymos duo are appropriate to test subjects because of their size. Smaller asteroids are far more common and present a significant theoretical concern in the coming days. Additionally, the two asteroids were ideal for the DART NASA new project due to their dual configuration and relative proximity to Earth.

There are 27,500 known near-Earth asteroids of different sizes that NASA is currently tracking, with the smallest astronomical object, Dimorphos moonlet. NASA foretells that there are many additional asteroids in the near-Earth vicinity that have not yet been identified, even though none of these are known to pose any threat to civilization.

In November 2020, the DART spacecraft was launched into orbit. Future missions conducted by the European Space Agency will examine Dimorphos and Didymos in greater detail and research the impact crater on the asteroid.

The Top 10 Leaders in AI Companies

Top 5 Reasons to Perform VAPT of Your Web Application