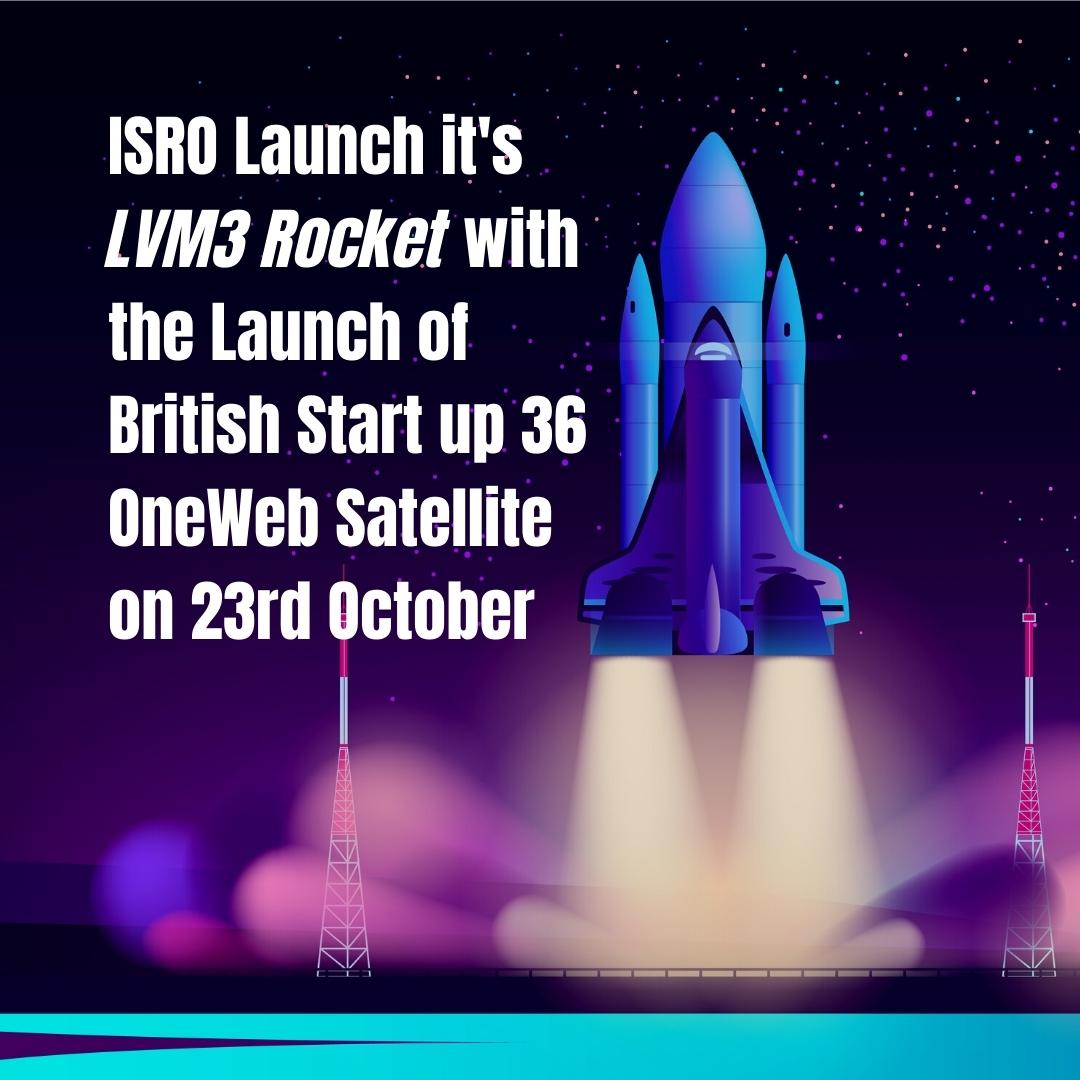 On October 23, the Indian space agency would launch a 36 OneWeb satellites on board from the spaceport Satish Dhawan Space Centre in Sriharikota, Andhra Pradesh. LVM3 was earlier called GSLV Mk III.

The launching of the Geosynchronous ISRO Satellite Launch Vehicle-Mark III (GSLV Mk III) rocket transporting 36 OneWeb satellites or “LVM3 – M2/OneWeb India-1 Mission” was scheduled for October 23 at 12.07 a.m. (IST), according to the Indian Space Research Organisation (ISRO). Through this launching, ISRO is stepping into the Global Commercial service sector.

ISRO has said, “It is the first LVM3 dedicated commercial launch on demand through NSIL. This contract with M/s OneWeb is a historic milestone for NSIL and ISRO, as LVM3, is making its entry into the Global commercial launch service market”.

This newest spacecraft is capable of four tonne class of satellites into a Geosynchronous Transfer Orbit (GTO).

LVM3 is a three-stage vehicle with two solid motor strap-ons, a liquid propellant core stage and a cryogenic stage. The cryogenic engine stage and the equipment bay assembly, according to the announcement, have been finished. Final inspections are being conducted while the satellites are being assembled and encapsulated in the rocket. “Cryo stage, equipment bay (EB) assembly completed. Satellites are encapsulated and assembled in the vehicle. Final vehicle checks are in progress,” it said.

“It is the first LVM3-dedicated commercial launch on demand through NSIL,” ISRO had said.

“This contract with M/s OneWeb is a historic milestone for NSIL and ISRO, as LVM3, is making its entry into the global commercial launch service market,” it had said.

Network Access Associated Ltd. (OneWeb) and NewSpace India Ltd. (NSIL), the commercial arm of the ISRO, have signed two contracts for the launch of the latter’s broadband communication satellites into low earth orbit.

The official told IANS, “The total launch mass will be six tons”.

OneWeb is expected to launch pad another set of 36 satellites in orbit in January 2023.

In order to provide communication services, the satellite company intends to build a constellation of 650 satellites in low-Earth orbit.

Late last month, the satellites arrived in India, and since then, integration work has been proceeding. OneWeb plans to deliver high-speed, low-latency connection services all over the world, and with this ISRO rocket launch, it will have more than 70% of its intended Gen 1 Low Earth Orbit (LEO) constellation in orbit, according to a press statement from the company.

Be Conscious of these predicted Cyber Security Trends in 2023

There was a Twitter News Controversy in November among the Indians: Know the Facts