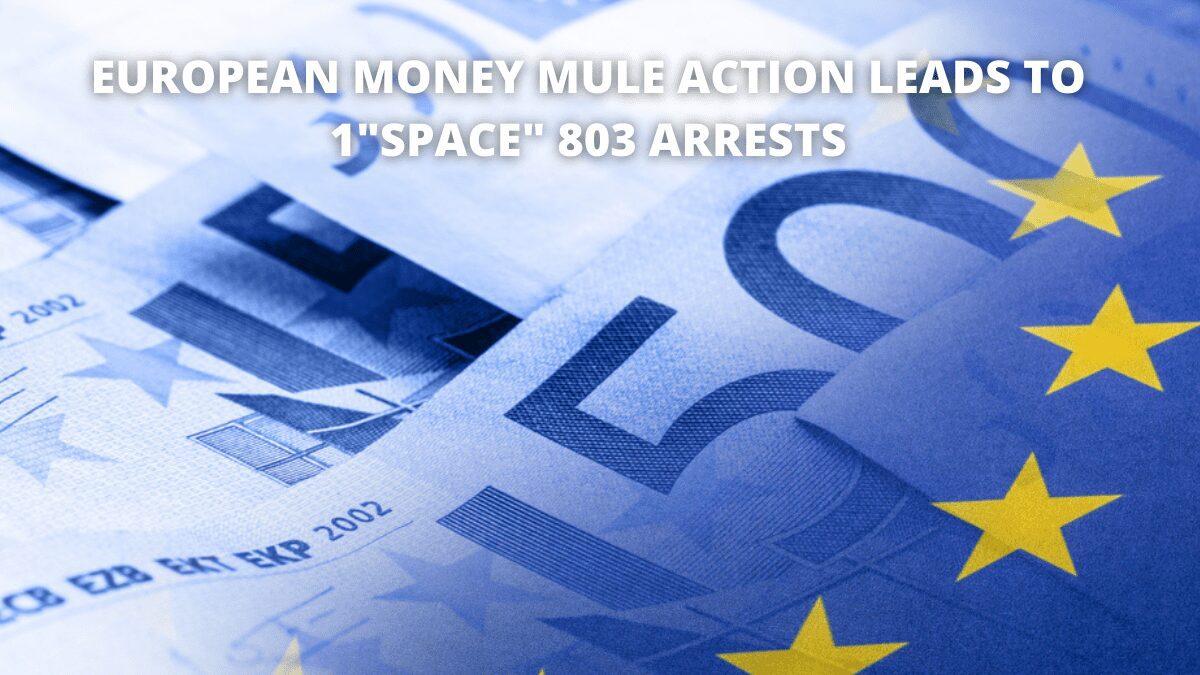 A recent investigation revealed money mules were laundering profits from online fraud schemes such as business email compromises and forex scams. Europol today wrapped up its anti-money mule operation EMMA 7, a multinational action involving 27 countries, Eurojust, INTERPOL, the European Banking Federation (EBF), and the FinTech FinCrime Exchange. In all, 1 803 arrests were made, with more than 18 000 money mules identified. A wide variety of online scams, including e-commerce fraud, phishing, and SIM swapping, were being conducted using money mules.

A concerted effort involving law enforcement, financial institutions, and the private sector against money laundering was undertaken in Europe, Asia, North America, Colombia, and Australia during EMMA 7. In addition to targeting money laundering through muling networks, the investigators also sought information about the sources of these illicit profits, providing a better understanding of the size and nature of the criminal economies served by money mules.

Europol, Eurojust, and the European Banking Federation established the European Money Mule Action ‘EMMA’ in 2016. A public-private information-sharing program is central to combating complex modern crimes and it is the largest international program of its kind. Nearly 400 banks and financial institutions participated in the action, reporting 7,000 fraudulent transactions and preventing losses totaling nearly €70 million.

In roughly two and a half months of operations, Western Union, Microsoft, and Fourth line worked together with law enforcement, financial institutions, and the private sector against money laundering in Europe, Asia, North America, Colombia, and Australia. In addition to targeting money muling networks for laundering profits, investigators sought information on the sources of those illicit profits, which shed light on the size and nature of the criminal economies that money mules serve.

FIGHTING MONEY LAUNDERING AS A TEAM

The European Money Mule Action (EMMA) was initiated in 2016 on the initiative of Europol, Eurojust, and the European Banking Federation. This was the seventh iteration of the campaign. To fight complex modern crimes, it is the largest international operation of its kind.

Nearly, 400 banks and financial institutions participated in the activity, reporting 7000 fraudulent transactions and averting a loss of nearly €70 million.

EMMA allows all of these parties to communicate with one another, giving information that can help identify potential money mules and lead to arrests. Europol assists at each level of the planning process by bringing together law enforcement and private sector partners and promoting information exchange. Europol offered analytical support throughout the operative phase, connecting the transnational cases to the money muling networks that were behind them.

The majority of the EMMA 7 investigations focused on the international aspect of muling. Money mulling activities involve mules not only carrying money across nations but also traveling between countries to open bank accounts in other countries. Criminals can then utilize these accounts to facilitate money laundering later on.

THE IMPORTANCE OF AWARENESS AS WELL AS ACTION

Money muling operations’ intricacy, as well as law enforcement’s response to them, reflects how muling networks are built. Money mules, unlike many other financial crimes, can be unwittingly recruited into the illegal enterprise. Organized crime groups prey on vulnerable populations such as students, immigrants, and people in financial hardship, offering quick cash through phony job ads and social media posts.

When it comes to the law and money muling, ignorance is not an excuse; they are breaking the law by laundering the illicit proceeds of crime. As a result, Europol coordinated the ‘#DontBeAMule’ public awareness campaign with all participating countries, law enforcement, and the EBF on behalf of European banks to avoid additional innocent bystanders from being used by criminals and putting themselves in danger.

Eurojust engaged in the operation through a specialized liaison officer and remains ready to assist national authorities with cross-border investigations and judicial cooperation at their request.

The Netherlands is the leading EMMA, which is part of the EMPACT Sub Priority Cybercrime NCPF (Non-Cash Means of Payment Fraud).

Money Mulling Awareness and its Prevention

Money mules, unlike many other financial crimes, can be unwittingly recruited into illegal enterprises. Organized crime groups prey on vulnerable populations such as students, immigrants, and people in financial hardship, offering quick cash through phoney job ads and social media posts. Money mules disobey the law by laundering the illicit proceeds of crime, and ignorance is not an excuse.

To combat this, Europol collaborated on the ‘#DontBeAMule’ public awareness campaign with all participating nations, law enforcement, and the EBF (on behalf of European banks) to avoid more innocent bystanders from being used by criminals and putting themselves in danger.