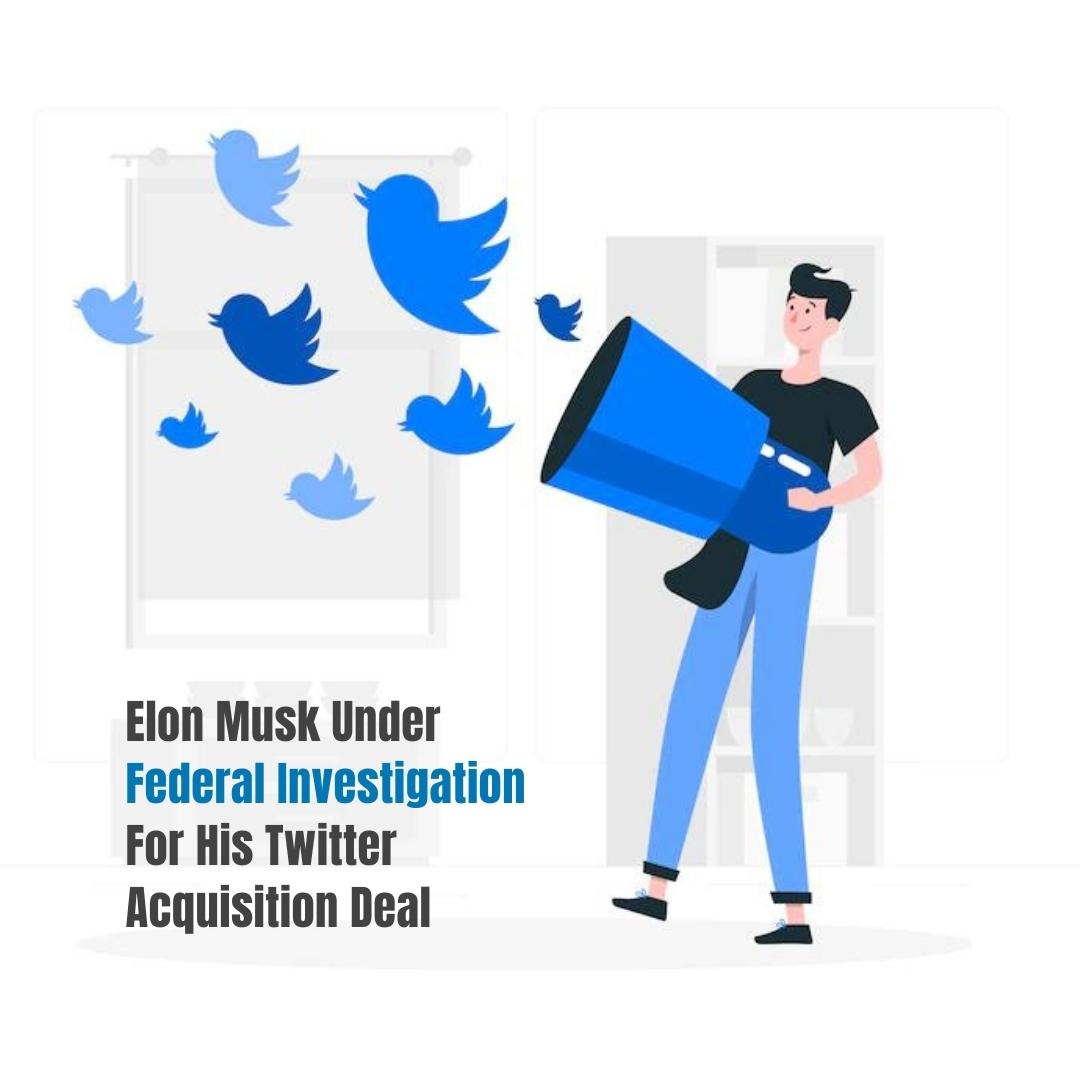 Tesla and SpaceX CEO Elon Musk is under federal investigation, Twitter revealed in a court document on Thursday. Twitter news states – ‘Elon Musk has a federal probe affecting his $44 billion acquisition of the social media platform.

The Securities and Exchange Commission is looking into whether or not Musk violated anti-fraud laws when he made the announcement.’ This is not the first time Musk has been in hot water with the SEC.

In 2018, he was sued by the commission for making false and misleading statements about plans to take Tesla private. The case was settled with a $20 million fine, and Musk agreed to step down as Tesla’s chairman for three years.

Now, it looks like history may be repeating itself. If Musk is found to have misled investors again, he could face much harsher penalties this time around.

Twitter, which sued Elon Musk in July to pressure him to finalize the purchase, claimed the Tesla CEO’s attorneys had invoked “investigative privilege” to withhold the information it needed.

Who is Elon Musk?

Elon Reeve Musk is a business magnate, industrial designer, and engineer. He is the founder, CEO, CTO, and chief designer of SpaceX. He is also knows for being an early investor, CEO, and product architect of Tesla, Inc. Musk is the founder of The Boring Company; co-founder of Neuralink. The co-founder and initial co-chairman of OpenAI. A centibillionaire, Musk is one of the richest people in the world.

Musk was born to a Canadian mother and a South African father and raised in Pretoria, South Africa. He briefly attended the University of Pretoria before moving to Canada aged 17 to attend Queen’s University. He transferred to the University of Pennsylvania two years later, where he received dual bachelor’s degrees in economics and physics. In 1995, he moved to California and attended Stanford University but decided instead to pursue a business career. He co-founded a web software company Zip2 with his brother Kimbal. The start-up was acquired by Compaq for $307 million in 1999. Musk co-founded online bank X.com that same year, which merged with Confinity in 2000 to form the company PayPal and was subsequently bought by eBay in 2002 for $1.5 billion.

In 2002, Musk founded SpaceX, an aerospace manufacturer & space transport services company. He is CEO, CTO, and lead designer of the company.

What is the acquisition of Twitter by Elon Musk?

In July 2018, Tesla CEO Elon Musk announced that the electric car company would be acquiring SolarCity in an all-stock deal worth $2.6 billion. The move was widely seen as Elon Musk’s ambitions to create a sustainable energy empire. It’s worth mentioning that SolarCity is one of the leading solar panel providers in the United States.

Elon Musk, the richest man in the world, has agreed to pay $44 billion to acquire Twitter. With this, a saga that began with hostile takeover attempts and ended with him having personal authority over one of the most influential social media networks in the world will come to an end.

If investigators find that Musk did mislead investors, he could face criminal charges and be forced to step down as Tesla’s CEO. The Twitter acquisition deal has put a cloud of uncertainty over Tesla and its future, and it remains to be seen how this investigation will impact the company going forward.

The Securities and Exchange Commission is investigating Tesla CEO Elon Musk over a tweet he sent last week. According to the tweet, he was considering taking the company private at $420 a share.

The SEC’s inquiry is focused on whether Elon Musk’s Twitter tweets were truthful and, if not, whether they constituted fraud, sources familiar with the matter told CNBC.

The investigation is in its early stages, and it’s unclear how long it will take. It’s also unclear whether the SEC has issued subpoenas or formally requested information from Tesla or Musk.

Tesla declined to comment on the SEC investigation. A spokesperson for Musk did not respond to requests for comment.

Why is the Investigation Happening?

The SEC is investigating whether or not Tesla CEO Elon Musk violated securities laws when he tweeted about taking the company private. The tweets in question were posted on August 7, 2018, and claimed that funding for the deal had been secured.

The investigation is still in its early stages, but it is possible that Musk could be charged with fraud if the SEC finds that he made false statements in his tweets. If convicted, Musk could face up to 20 years in prison.

The SEC’s investigation will likely take couple of months to complete, so it’s unclear what the outcome will be. This scrutiny is yet another example of the challenges Tesla has faced over the past year.

The materials that would be suppressed were listed in a “privilege log” that Mr. Musk’s attorneys delivered toward the end of September.

The log mentioned emails that were sent on May 13 to the US Securities and Exchange Commission (SEC), the American regulatory organisation in charge of upholding the anti-market manipulation laws.

Twitter’s court submission, according to Mr. Musk’s attorney Alex Spiro, was a “misdirection,” he told Reuters. He stated, “Federal investigators are looking into Twitter’s executives. Twitter declined to respond to the assertion.

Elon Musk is under federal investigation for potentially violating securities laws with his Twitter acquisition deal. The SEC is looking into whether or not Musk violated the law by tweeting about the deal without disclosing all of the relevant information. This could be a serious problem for Musk, as he could face hefty fines or even jail time if he is found guilty. Besides Elon Musk Twitter news (about his $44 billion acquisition of Twitter) is now a focus ground till it concludes.

Gender Inequality is Prominent in AI in Data Science: But why?

What are the Top Advantages of Getting AWS Certification?