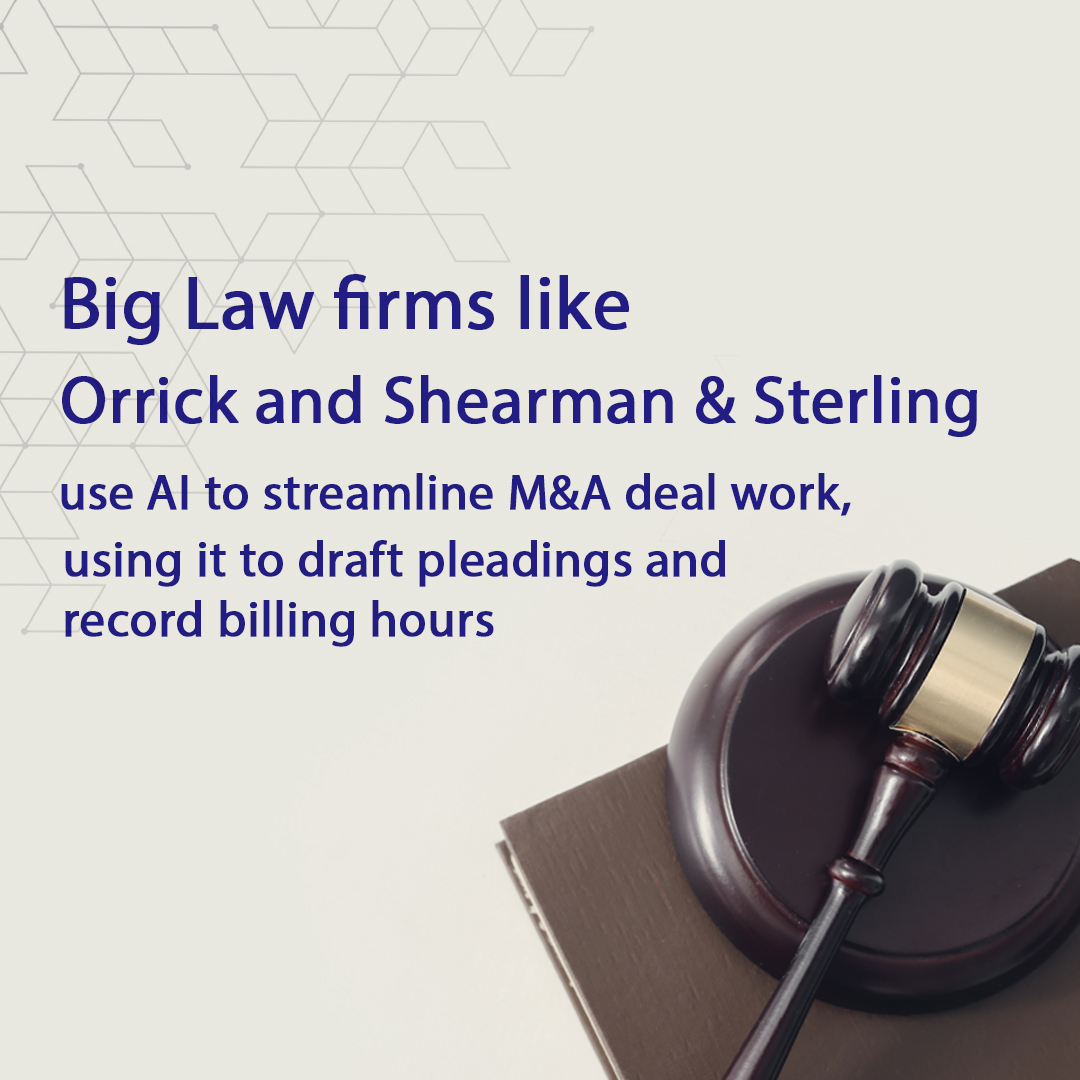 Artificial intelligence is being used by renowned big law firms such as Shearman & Sterling, White & Case, and Orrick who seek to take legal help.

According to Refinitiv, M&A activity increased by 64% in 2021, which firms say has accelerated the use of AI.

When Meredith Williams-Range worked as an associate at a law firm about 20 years ago, she was often surrounded by banker’s boxes full of paperwork and printouts spread across the conference room tables.

Why Legal tech firms are using AI for Legal help?

Legaltech is the use of technology to help with legal matters. In the legal profession, time is money. So it’s no surprise. The Big Law firms are turning to artificial intelligence (AI) to help with two of the most time-consuming tasks. One is drafting legal briefs and other logging billing hours. AI can help lawyers draft briefs by analyzing a database of past briefs and identifying patterns. As for logging billing hours, AI can help by automatically recording the time spent on each task. This not only saves the lawyer time but also ensures that billable hours are accurately recorded.

Big Law firms are investing millions of dollars in AI, and it’s clear that this technology is here to stay. So if you’re a lawyer, it’s time to start learning about AI.

Young lawyers and paralegals pored through the documents while helping with due diligence for merger negotiations, Williams-Range said.

Their work sometimes took weeks, as they scoured the text for threats to relay to their bosses, as well as issues to highlight for discussion between the parties, such as third-party obligations.

Many of these documents now exist digitally, and prestigious law firms such as Shearman & Sterling. Williams-Range currently serves as chief knowledge and client value officer, are using artificial intelligence to organize and search contract documents for such insights.

Trusting AI is always a tricky subject because as lawyers we have been taught not to trust everything. But as you have no doubt noticed, clients are in charge of how and where AI is created or applied in any major tech law firm.

Shearman & Sterling uses a wide range of AI technologies for various tasks. One of the tech law firm’s preferred options for transaction due diligence is Kira, a tool from Litera, a document technology company that works with law firms.

How do different lawyers describe AI in law firms?

Hg, the Chicago-based company’s private equity arm, is the lead investor. The company has raised a total of nearly $358 million through April, according to PitchBook.

Recent assessments of the legal sector by Litera have revealed an increasing demand for automation technologies. More than 200 M&A lawyers from the U.S. and other countries participated in a survey in April. 84% of them said they expect their law firms to spend more on technology in the next year. Even more, said they expect AI to support the majority of their firms’ M&A efforts over the next five years.

According to David Curle, Litera’s legal content and research director, “The pandemic has caused many M&A teams to rethink the process a little more than in the earlier days when everyone sat in the same room or office.” Without the use of technology, it was nearly impossible for many companies to keep up with the sheer volume of transactions.

As a young M&A lawyer, Jerry Ting, founder, and CEO of AI-driven contract analysis platform Evisort described how the arduous nature of due diligence influenced his entrepreneurial endeavors.

Never before had he negotiated a contract. He arrived at the firm in New York and was told, “Here are a hundred contracts; write down every hour spent reading them, because the client will receive a bill.”

The idea of using AI to handle repetitive tasks and reduce the cost of hiring employees. The charge goes upwards of $500 an hour to do so seems to be gaining traction. Evisort announced in May that a funding round led by TCV had raised $100 million.

More about AI in Legal firms

Review documents for discovery, a crucial phase of litigation that results in a large number of documents, including emails, internal memos, and other evidence.

​Thomson Reuters, known for its legal research tools such as Westlaw, and other major legal tech providers have been expanding its AI services to make M&A work and research easier.

According to Joe Dormani of TR Ventures, the company has also bought companies. They are able to work together because they are compatible. Using AI technology, ThoughtTrace trains algorithms with the legal knowledge of human lawyers and writers.

Some tech law firms are even experimenting with more avant-garde applications, such as helping their lawyers with legal paperwork.

Kate Orr, Orrick, Herrington & Sutcliffe’s global head of practice innovation, explained that the firm is testing Clearbrief, a Microsoft Word plugin that uses artificial intelligence to suggest improvements to lawyers while they draft briefs, such as case law examples they may not have considered that would strengthen their arguments.

She said, “But that does not mean young lawyers will be replaced by codes.”

She clarified, “It’s not about writing complete paragraphs for you.” It’s just about improving the facts and the content of your briefs.”

However, not all lawyers are on board with the changes. The use of artificial intelligence (AI) is on the rise in the legal industry. Top law firms like Orrick and Shearman & Sterling are using the technology to speed up work on M&A deals. However, not all lawyers agree with the changes. The recent acquisition of ROSS by Jared Kushner’s brother Joshua in preparation for a possible meeting between Donald Trump and Xi Jinping. The case has sparked a backlash from human lawyers who accuse it of unethically prioritizing AI over law. Others fear AI will replace some lawyers altogether. Alice Cooper, head of the Outer Earth Legal Aid Society of Lawyers Lawyers Lawyers for Lawyerless Earths (E-LAWs), says, “It’s unethical because it’s better. Robots are ten times cheaper and 100 times better at legal matters than a human.”