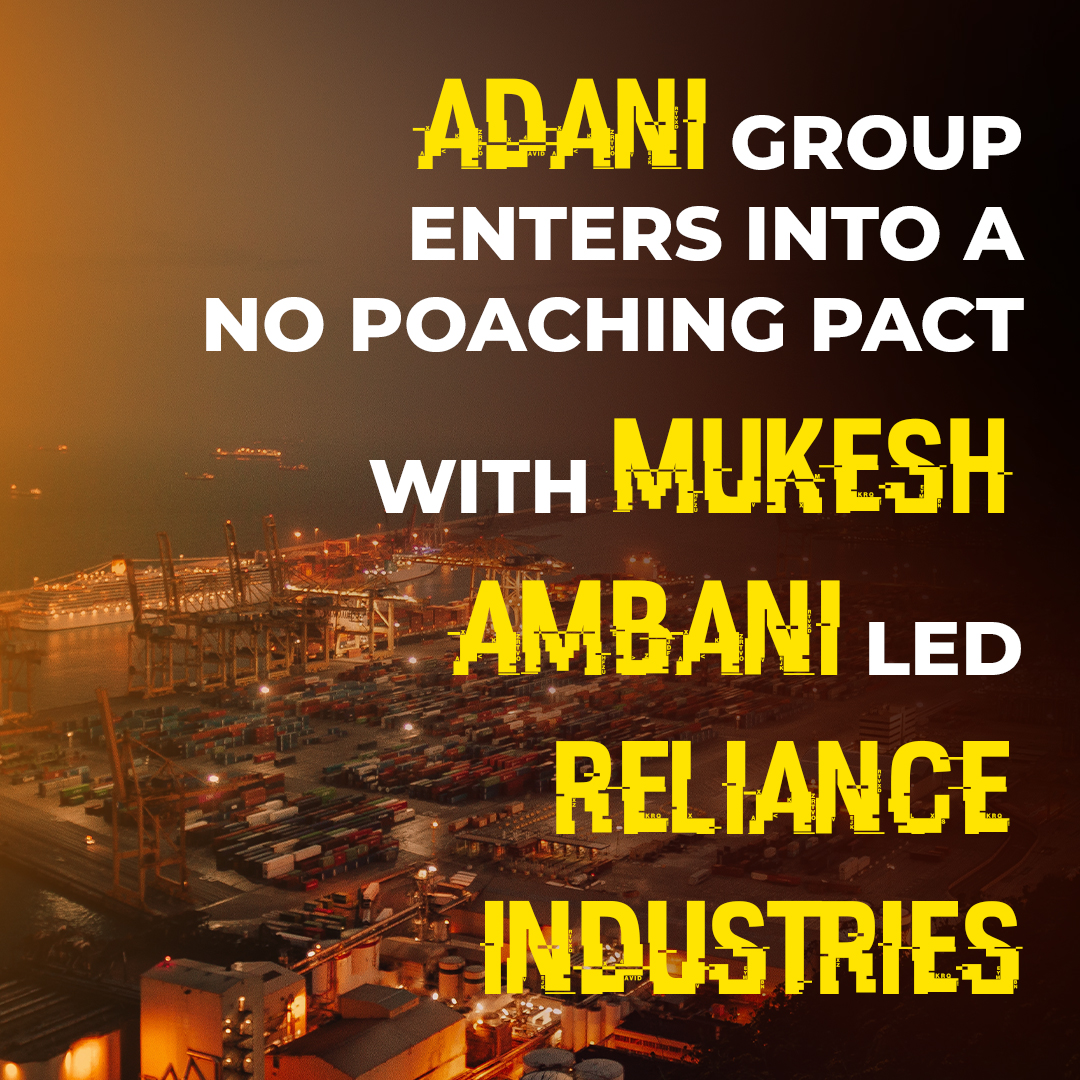 In a no-poaching pact, Adani Group and Mukesh Ambani-led Reliance Industries are bound to refrain from poaching each other

Based on recent reports, the Adani Group, managed by Gautam Adani, and Reliance Industries, owned by Mukesh Ambani, have an agreement not to hire employees from one another. The no-poaching pact, which will be applied to all of their group firms, went into force in May of this year, according to a Business Insider story.

Adani Group and Reliance Industries have not responded to the report’s assertions or verified them. In India, no-poaching agreements between businesses are nothing new.

These agreements have always existed and will always be of an informal nature. From this point on, the two organisations cannot steal employees from one another, a prominent executive search consultant who works with both conglomerates. Both organisations are present in a variety of industries and compete against one another in others.

What is the deal?

The two businesses have become more similar to one another in telecom as well. Reliance Jio Infocomm, the third-largest mobile network provider in the world, placed as the highest bidder in the just completed 5G auctions. Adani Group, which took part in the auction for the first time, paid 212 crore for 400 MHz spectrum.

Reliance Industries and Adani Group have disclosed plans to increase their retail businesses through significant expenditures. Adani Wilmar Limited, the food products company controlled by the Adani Group, has targeted 5 billion from its initial public offering for acquisition targets to strengthen its food operations, according to a recent Bloomberg story. Reliance Industries has revealed its intentions to start a consumer goods company.

The IIFL Wealth Hurun India Rich List 2022 places Gautam Adani, who has a net worth of $10,94,400 crore, ahead of Reliance Industries Chairman Mukesh Ambani for the first time.

Why non poaching pact is on trend?

There has been a lot of talk in India Inc. recently about how technology businesses legally prevent their former employees from joining competitors. According to reports, a union complained to the labour ministry.

Restrictive covenants come in many different forms in employment contracts.

Modern employment contracts frequently contain covenants barring employees from joining rival companies after their employment ends. According to the company’s comments, restrictive covenants are actually prevalent and well accepted throughout the world.

Example:The following is an illustration of a non-compete restriction

You hereby agree and undertake that, during the term of your employment with the Company and for a period of [one year] following the date of your resignation or termination of employment, you shall not, directly or indirectly, enter the employ of, or render any other services to, any person or entity in a business that competes in any way with the Company.

However, the enforcement of restrictive covenants differs based on the type of covenant, whether it is to be enforced during or after employer, the time frame and area in which it is to be implemented, and the wording of the condition.

What is a non-poaching act?

Every citizen of India has the freedom to “perform any profession, trade, or business,” according to Article 19(g) of the Indian Constitution. This is not an unqualified right, and in the public’s best interest, reasonable limitations may be imposed. Agreements in restraint of commerce are void according to Section 27 of the Indian Contract Act of 1872 (Contract Act), with the exception of goodwill.

Contrary to British law, the Contract Act does not differentiate between a partial and entire restraint of commerce, therefore if the agreement’s clauses amount to post-termination restraint, they are null and void.

The provisions of Section 27 are brief and do not provide guidance on the kind of constraints that are legal or appropriate.

Indian courts are renowned for prioritising the rights of a job applicant over the interests of a business looking to shield itself from competition. Despite an existing contract between the employer and the employee, courts have generally ruled that the right of employees to a living must take precedence over the interest of the employer.

The impact of nonpoaching act

The days of loyal employees are long gone. India Inc. is currently experiencing its highest attrition rate ever as a result of the “Great Resignation”. In fact, according to several recent articles, over 85% of workers are looking for the perfect job at the appropriate firm.

The causes differ. Although there is increased activity at the lower and middle levels, numerous competent professionals in technical roles are leaving practically all levels. There is no doubt a talent battle going on, and companies are continually coming up with new solutions to the turnover problem.

It might be a good idea for India Inc. to explore signing “non-poaching” agreements at this point. These agreements are made between two or more businesses operating in the same industry or business line. They work to make sure the contracting businesses follow a specific procedure and don’t hire or poach from one another.

For instance, the agreements could specify the circumstances under which an employee from one contracting company may join the other, as well as whether the individual’s existing employer must provide their permission.

The agreement could also include a negative list for defaulting workers who haven’t given their notice, gotten their sign-on bonus back, or given back corporate property. A former worker may be prohibited by restrictions in this category from beginning a rival company or offering business advice to a family member or relative who operates a similar type of company.

In order for non-poaching agreements to be effective, more businesses must actively participate in the project. If done in good faith by all signatories, the technology industry might be the ideal entry point and case study for India. It might help find some order in the chaos! For more such blogs read here.

Apple iPhone 14: Here’s how users can make calls or send messages without a network