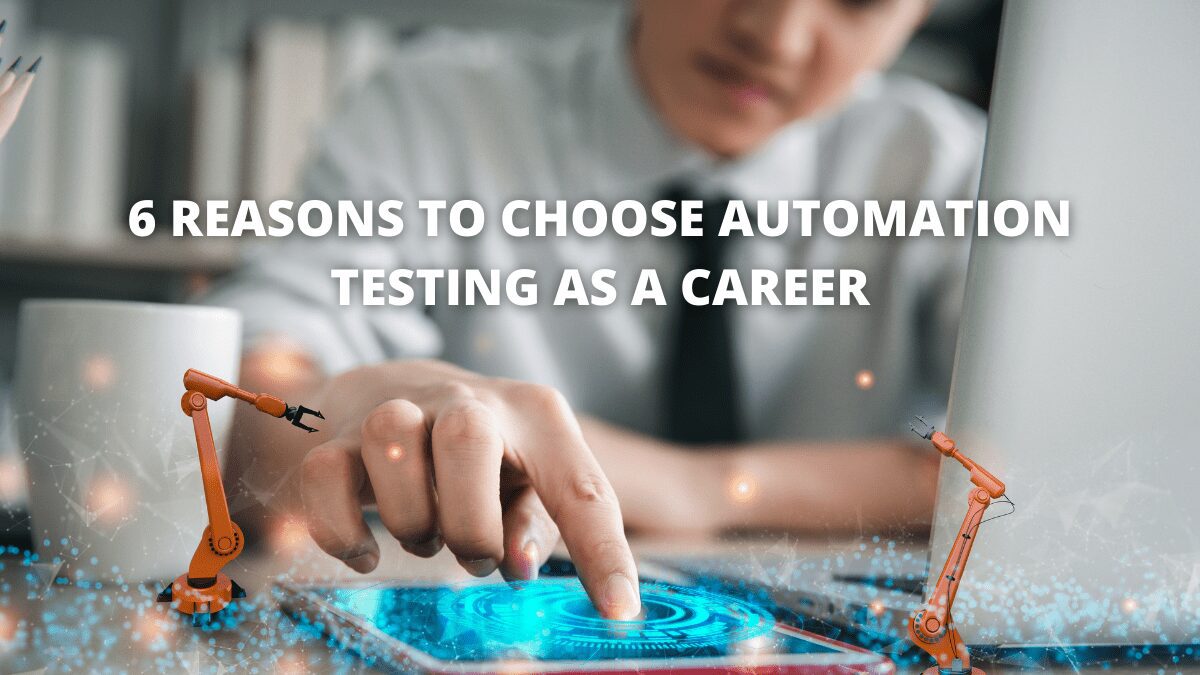 As you still are in dilemma about choosing automation testing as your career, here are 6 reasons why you should think no more.

In this era, 24 hours aren’t enough. We seek everything faster to save time and generate more revenue.

As the world moved into digitization, the necessity of testing software and services grew tremendously. But, with this new intent of saving time and doing more, automation testing is the only way.

While manual testing is still relevant to some extent, automation testing has rapidly started to replace mundane and repetitive tasks that manual testing took forever to execute.

Manual testing does the job of providing feedback effectively but is slow and you need to do it from scratch every time something goes red. Automation testing, on the other hand, can break down the parameters and only test the units that were pitching issues.

After manual testing, the testers submit the error reports manually with traditional logging tools and monitoring tools. But with automation testing, the reports can be generated and forwarded automatically. This method promotes a faster feedback cycle.

As the companies are pivoting towards automation testing in 2022, choosing that as a career choice is beneficial to both you and the company.

Automation testing is comparatively easier to learn than manual testing. If you already have elementary knowledge of programming or better manual testing, you can learn Selenium and automated testing for beginners in a week.

Although it’s easier to start with automation testing, it’d take you 2–3 months before you can learn the full extent of it. Learning to code, if you don’t have any programming knowledge will probably be the most challenging element in your journey towards automation testing.

In contrast, if you want to be a developer without having programming skills, it might take you years of learning before you can land a job as a developer.

As automation testing doesn’t take much time to learn, companies always tend to hire freshers for this job. They are looking out for more trainable employees, less on the experienced ones. If you are a fresher with little to no knowledge about programming and testing but want to get into IT, it’s the best career choice for you right now.

When you are employed as a manual tester, the probability of human error grows significantly as any other manual procedure. But, if you are an automation tester, you don’t need to look into the procedure of testing. You are only responsible for initializing the testing frameworks and submitting the report to the developers.

This is one of the many reasons that companies are looking for more automation testers than manual ones. Automation testing ensures that the testing procedure remains consistent, adheres to the process, and complies with the security measures that the company and client policy indicates.

Imagine your first day in a corporate setup, you are assigned a task to go through the shopping categories of an e-commerce app to find issues within the results. By surfing through all of them you find several glitches and report to the team.

The next day, after the developers have fixed the issues, you are assigned to do the same job again. You do it happily as you were the one who found the glitches.

But next week, developers roll out a new update and you get assigned the same tasks all over again.

Your boredom to do the same task every day plants the seed of human error.

The companies don’t want that to happen. Human errors and sluggish feedback cycles cost them a lot. So, most of them are looking to replace it with automation testing.

4. Automation Testing is in Demand

As the MLOps and DevOps capabilities are increasing, so is the need for a faster development cycle. To get parallel with the new faster requirement of clients, companies are considering automation testing wherever possible, despite their initial costing.

In 2019, a global survey concluded that 90% of the companies believed that manual testing is a hindrance in their development process. But, only 7% of them have already considered automation testing for their companies, indicating that the industry still has room to grow and 2022 is the best time to consider automation testing as a career choice.

As automation testers know the basics of programming, you can utilize it to garner more knowledge and experience to build a better career in development. But you have to be persistent about learning and building a network for yourself.

It’s a corollary from the above discussion that automation testing and automation testers are far more valuable for a company than we give them credit for. If you are looking for reasons to start learning automation testing, look no more. But, if you already have some experience and are considering a career in automation, start applying to the open positions today.